Brief Synopsis:
This edit shifts the focus of the film on Grace, Pilgram and Tom.
Intention:
To make the film focus more on Grace McLean, Pilgrim and Tom Booker.
Release Information:
DVD
Cuts and Additions:
- 10 minutes of footage from the first 40 minutes of the film were removed to shorten the time it takes to get to the ranch in Montana. These 10 minutes comprise of various scenes showing Grace and Judith riding their horses, scenes showing Pilgrim being captured/sedated/cared for by Liz Hammond, Annie McLean at her’s and Robert McLean’s New York apartment, at her place of work and some hospital scenes were either trimmed or removed completely).

- All scenes which Show Tom Booker and Annie McLean’s characters alone were removed, as well as any scenes that show them looking at each other and/or embracing in a romantic/passionate manner in situations where other people are present (e.g. dancing together at a local barn dance).

- Occasional glances between Tom Booker and Annie McLean’s characters characters were trimmed from scenes that have otherwise been included.

- The final 8 minutes of the film was also removed as this mostly involved Tom Booker and Annie McLean’s characters characters.

- Added a few frames here and there and especially at the very end of the fanedit.

- Added Taylor Swift audio to scene where Grace is in her bedroom watching videos of Pilgrim.
Cover art by Metrostar (DOWNLOAD HERE) 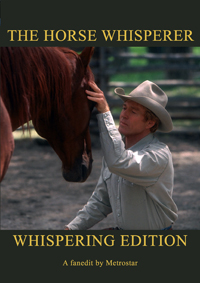