Hobbit: The Battle of the Five Armies - Entirely Respectable Edition, The

Brief Synopsis:
The 'Entirely Respectable Editions' seek to remove all material that is silly, overplayed, misjudged, overly comical, ridiculous and generally inconsistent with the more serious tone established in the earlier 'Lord of the Rings' Trilogy. It is not a radical restructure, or a two-film cut and does not set out to streamline narrative, quicken pacing, or remove characters and plot-threads. The more time we spend in Middle Earth the better, I just want Middle Earth to be a more sensible place while we're there.
Intention:
I was kind of glad Guillermo del Toro didn't get to Direct because as much as I love his movies, he was never going to make films that were tonally and stylistically consistent with the LoTR series... unfortunately neither did Peter Jackson. The serious, grand and relatively realistic tone of LoTR, was mixed with a new more childish, silly, comic and overblown style. Thankfully there is enough good material that a Fanedit should be able to fix everything.
Additional Notes:
"I've noticed a tendency for The Hobbit Trilogy to get rather silly. Now I'll do my best to keep things moving along but I'm not having things getting silly. The first two films got very silly indeed and that last one about the armies was even sillier. Now, nobody likes a good laugh more than I do, except perhaps my wife and some of her friends. Oh yes, and Captain Johnson. Come to think of it, most people like a good laugh more than I do, but that's beside the point. Now, let's have a good, clean, healthy Tolkien film. Get some air into your lungs. Ten, nine, eight and all that".
Other Sources:
- The Hobbit: The Battle of the Five Armies (Extended Edition Blu-Ray)
- The Hobbit: The Battle of the Five Armies (Theatrical Edition Blu-Ray)
- The Hobbit: The Desolation of Smaug (Extended Edition Blu-Ray)
- The Hobbit: An Unexpected Journey (Extended Edition Blu-Ray)
- The Lord of the Rings: The Fellowship of the Ring (Extended Edition Blu-Ray)
- The Hobbit: An Unexpected Journey (Soundtrack)
- The Hobbit: The Battle of the Five Armies (Special Edition Soundtrack)
- On Her Majesty's Secret Service (Blu-Ray)
- THX 1138: Special Edition (Blu-Ray)
- freesound.org (Various SoundFX)
- The Hobbit: The Battle of the Five Armies - Arkenstone Edition by Kerr
Special Thanks:
Thanks to the people who gave feedback in the project thread: revstevens, jrWHAG42, moviefan95, DigModiFicaTion, douchebag, addiesin, Gaith, Nic, hbenthow, asterixsmeagol, Belgarath, ChainsawAsh and m4semperfi. 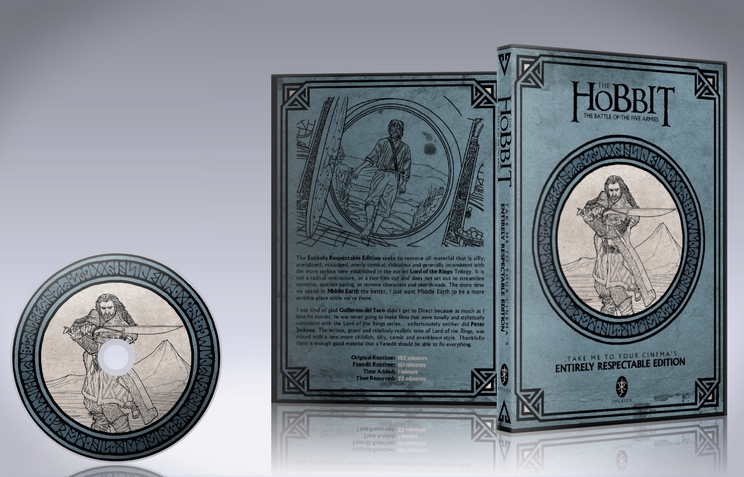 2 reviews
Overall rating
9.4
Audio/Video Quality
10.0(2)
Visual Editing
10.0(2)
Audio Editing
10.0(2)
Narrative
9.5(2)
Enjoyment
9.0(2)
Already have an account? Log in now or Create an account
June 03, 2020
Overall rating
9.5
Audio/Video Quality
10.0
Visual Editing
10.0
Audio Editing
10.0
Narrative
10.0
Enjoyment
9.0
TM2YC’s Entirely Respectable Editions of the Hobbit trilogy are exactly what they claim to be and more! While I am familiar enough with the originals to occasionally recognize when a scene was cut, if I wasn’t I wouldn’t, for the editing is expertly done. Only the most absurd and silly moments are removed without much, if any, restructuring, making the films more tonally consistent throughout as well as more inline with the LOTR trilogy.
My only dissatisfaction came from personal preference. Though I believe it was toned down some, I would like the love triangle removed entirely as it feels tacked on and detracts from Tauriel’s strong character. Also, the final battle itself drags on far too long. While most of the ridiculousness from the battle has been removed, there are still several moments left in that seem far too implausible and only serve to drag out the battle (and sooo many fake-out deaths/moments). I found myself losing immersion and checking the time once or twice. But other than those two minor personal preferences, this trilogy far exceeded my expectations for a Hobbit edit!

Do you recommend this edit?
Yes
Format Watched?
Digital
C
catferoze Top 500 Reviewer 7 reviews
Report this review Comments (0) | Was this review helpful? 1 0
April 30, 2020
Overall rating
9.3
Audio/Video Quality
10.0
Visual Editing
10.0
Audio Editing
10.0
Narrative
9.0
Enjoyment
9.0
TM2YC wraps up the Entirely Respectable Hobbit trilogy with rousing success. Much like the previous two installments, this edit of The Battle of the Five Armies is nothing short of fantastic from beginning to end, especially in terms of editing and A/V quality. For anyone who wished these Hobbit films more closely resembled the tone of The Lord of the Rings, all three of these edits come highly recommended.