Hobbit: The Battle of the Five Armies - Arkenstone Edition, The

Brief Synopsis:
The third and final installment of my “Arkenstone” edit trilogy. Like before, I’ve tried to keep the focus as much as possible on Bilbo, Thorin and Gandalf, while still giving the various side characters their moments to shine, without drawing attention away from the main story.
Intention:
In addition to keeping the focus on the main characters and storylines, my aim has been to improve the pacing and creating a more consistent tone. While the original cut featured several great character moments and dramatic scenes, there was unfortunately too much focus on battle scenes, action and silly comedy, which detracts from what is actually a good and effective drama – which I have tried to bring back to the forefront.

The first act has also been recut and reordered considerably to create a better and more logical flow. Many scenes in the original feel a bit disjointed and disconnected from the main story, so removing some scenes entirely and reordering the rest has hopefully resulting in a more exciting build-up to the battle. Unnecessary side plots, such as Tauriel’s banishment and the brief mentions of Angmar and Legolas’ mother, have been cut, keeping the focus on the plot threads that actually matter.

The battle itself has also been recut heavily to focus more on character moments than on over-the-top effects and action sequences. All in all this edit should provide a more satisfying conclusion to the Hobbit trilogy. In addition, the film has been color corrected to match the more vivid colors used in AUJ and my DoS edit, creating a more coherent color palette for the three films. Several bits of Howard Shore’s unused music have also been restored, wherever possible. 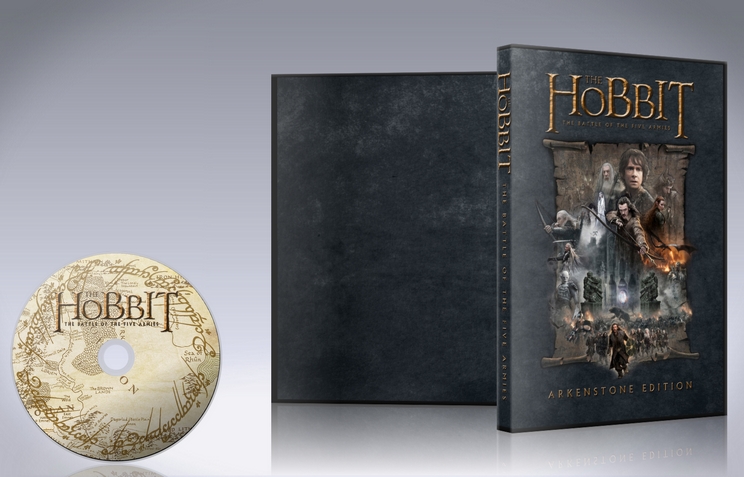 Wonderful little character moments from the Extended Editions and even the Appendices bring warmth to the film, and Kerr has given these moments the opportunity to shine by cutting back a lot of the weightless, tensionless cgi spectacle. While turning The Hobbit into a trilogy may not have been the best approach for Peter Jackson and co to set out with, it's clear to me that the films, as they were made, work best as three seperate stories. I'm glad I can finally enjoy them with these edits.

My only real disappointment is the fact that's it's only available as an >8GB MKV file. The first Arkenstone edition had an excellent 25GB Blu-Ray version that preserved the video quality of the source. The smaller file size of this release led to noticeable compression artifacts and visual muddiness throughout the film. Now that The Hobbit trilogy has been released on 4K HDR Blu-Ray, the gulf in visual quality will be even more severe. I do hope Kerr eventually releases a higher bitrate version of this edit.
O
octoroxx Top 500 Reviewer 16 reviews
Report this review Comments (0) | Was this review helpful? 0 0