Hitchhiker's Guide to the Galaxy, The: TWRBMHTVSE

Episode 2 “Fit the Second”
Fades in to Arthur and Ford in the Vogon airlock.
Added Above-mentioned new titles just before Arthur and Ford are rescued by The Heart of Gold.
Cut All scenes from following the first Improbability jump until arrival in orbit of Magrathea. This involves cutting the entire story line of Viltvodle VI and Humma Kavula sending Zaphod to find the Point of View Gun. Also removes Trillion’s kidnap and subsequent rescue from Vogsphere. Edited out to bring the story much more back in-line with the original. The cutting out of this much of the film does cause three continuity errors in the story following the cut that cannot be fixed. These are mentioned below, and what other alterations have been made, or explanations suggested to try and minimise them.
First continuity error following the Improbability Jump into orbit around Magrathea, Zaphod is wearing the Thinking Cap & Trillion has changed clothes. No cuts or alterations could be made to alter this, so as truly mind mending as “Hitchhiker’s” is, right this one off as a daft effect of the Improbability jump.
Second continuity error As The Heart of Gold is taking evasive action against the missiles, you barely hear Zaphod say “I can’t do this without my third arm.” Again, could not find a satisfactory cut to avoid this, and so again right this one off to the Improbability jump having caused Zaphod temporary loss of his third arm.
Fade to black and “To be concluded” caption added just after The Heart of Gold has landed on Magrathea.
Added Above-mentioned TV style end credits.

Episode 3 “Fit the Third”
Fade in to The Heart of Gold sat next to the Magrathea sign.
Cut Ford telling Arthur that Zaphod’s hunches are good and that they should go [through the portal]. This was edited out to fall in-line the next cut.
Cut Arthur’s line “Go with the hunch of a man whose brain is fuelled by lemons?” Edited out to minimise on the above-mentioned continuity error about Zaphod wearing the Thinking Cap.
Added Above-mentioned new titles just after Arthur tries to go through the portal.
Cut Zaphod telling Deep Thought that he doesn’t want to bother â€˜her’ anymore, Ford then reminding Zaphod to ask about the Point of View Gun that Humma [Kavula] sent him for, and then Ford asking Deep Thought about the gun. Edited out due to the Humma Kavula story line being removed. The crypt entrance still opens, and they do still find the gun so Marvin can use it during the fight with the Vogons.
Cut Ford’s line in the crypt under Deep Thought when he hands Zaphod the Point of View Gun “Here, it’s just like Humma said, now you can go and get your head back.” Edited out due to the Humma Kavula story line being removed.
Cut Trillion’s line “I can see why Humma Kavula would want one of these. Edited out due to the Humma Kavula story line being removed.
Third continuity error as Trillion starts to walk out of the crypt she says to Zaphod the she and Arthur are somewhat of an endangered species now thanks to him. This is referring to Trillion having found out about the destruction of the Earth, and that Zaphod had signed the order to destroy it, while she was being held captive on Vogsphere. Explanation: Even though Zaphod warned Arthur earlier in the film not to tell Trillion about the destruction of the Earth, we can assume that Arthur ignored this, but that he told Trillion 'off-camera’ and we just didn’t see it. Zaphod’s first reaction to the Point of View Gun has then been cut, removing the line “Of course you’re edgy, your planet’s been blown up, and you’ve been tooling around the galaxy with the guy who signed the order.” Otherwise this would be Trillion’s first news of the destruction of the Earth, and Zaphod’s line about 'the guy who signed the order’ wouldn’t make sense. Therefore, Trillion’s line about 'being an endangered species, thanks to Zaphod’, could simply be taken as her referring to him having whisked she and Arthur off around the galaxy, and away from everything they knew.
Added Deleted scene “Impossible Forces”. This scene shows Vice-President Questular’s romantic interest for Zaphod. Without it, she’s been chasing him throughout the story, and then all of a sudden they’re leaving Magrathea wrapped in each other’s arms.
Added Above-mentioned TV style end credits.

Note: There is still one brief appearance of Humma Kavula in this edit, but it is only the news reporter talking about his defeat by Zaphod. I was unable to edit this as it caused too much of an unfixable hard cut.
Cover art by Merlin (DOWNLOAD HERE) 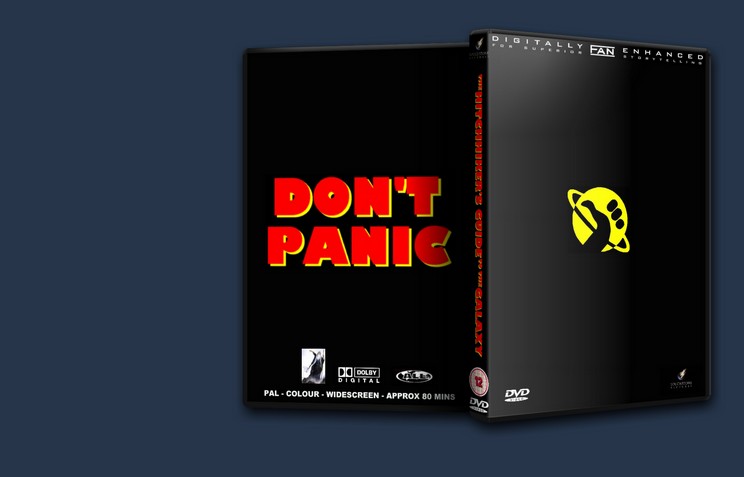 What I liked: The narrative was greatly improved and streamlined. I found very few parts jumpy, but a few I did (although I don't think I might have noticed if I wasn't watching a FanEdit). The pacing was fantastic. I hated the originals' beginning half-hour.

What I didn't: The movie was edited together amazingly but there were a few small things. I really don't have a lot to add here.

Extra: Why aren't you watching this!

*This rating was given before reviews were required*
A
adabisi Top 10 Reviewer 139 reviews
Report this review Comments (0) | Was this review helpful? 0 0