Brief Synopsis:
Star Wars with a rocking soundtrack! Heavy Star Wars takes the existing action and adventure, trimming away unnecessary story/action/bad acting, and replaces the soundtrack with Rock music!
Intention:
My intention was to make a Star Wars movie a bit more easier to watch, especially if you are not a fan. I started with Episode III on a whim, finished Episode I, then II, and now this is the first move into the original trilogy! John Williams' Music is forever tied to the Star Wars movies, but I decided to use music from a completely different genre to not only tell the story, but to add a bit of humor and perhaps some subtle insight as to the motives of the Jedi Knights. I tried to make this movie a bit more mature, by removing some silly scenes, and removed some moments of doubt among the Jedi to make them more assertive and confident. I also added a bit more contrast and a cooler color palette with brighter colors to give it a more comic book feel.
Other Sources:
Music in order of Appearance:

Heavy Metal - Sammy Hagar
Can't You Hear Me Knocking - The Rolling Stones
Take Your Time (Do it Right) - S.O.S. Band
Time - Pink Floyd
The Trooper - Iron Maiden
Planet Caravan - Black Sabbath
Tick Tick Boom - The Hives
Battle of the Planets - Tatsunoko Productions Company
Stratosfear - Tangerine Dreams
Riders on the Storm - The Doors
Satellite - Smash Mouth
Burn - Deep Purple
Soul Sacrifice - Santana
Slippin' into Darkness - War
Welcome to the Jungle - Guns N' Roses
Cowboys from Hell - Pantera
Thunderstruck - AC/DC
Freebird - Lynyrd Skynyrd
House of the Rising Sun - The Animals
Special Thanks:
Special Thanks to George Lucas for truly creating a world that is believable, MatrixGrindhouse for reviewing the film, and JJE-187 for putting together the look of the DVD cover!
Release Information:
Digital
Editing Details:
The inspiration for my approach was the movie Heavy Metal, and also my background in editing music videos helped with creating a hopefully visually interesting experience.
Cuts and Additions:
MTV music video editing was used in the action scenes, but in the moments where I had to cut down scenes for time and what not, whatever was left and I had to piece together, I edited the movie as close as possible to the pacing set by the original movie.
Cover art by mredthefed (DOWNLOAD HERE) 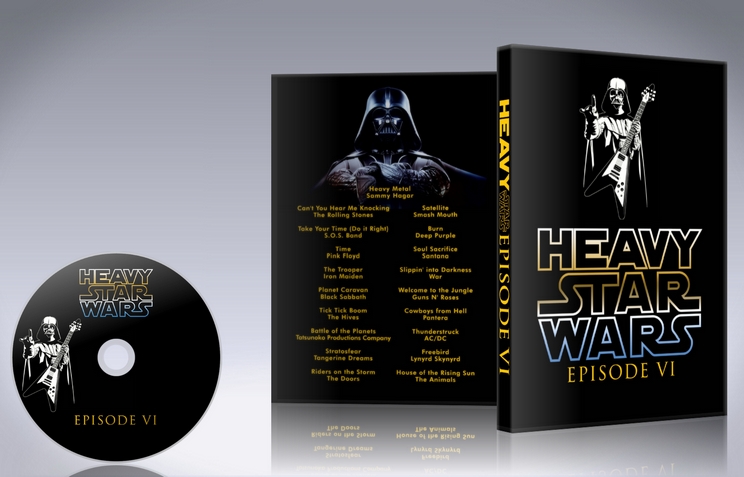