Brief Synopsis:
When a mysterious alien crashes near Coast City, Hal Jordan existence is turned upside down. Chosen by a mysterious Power Ring, which grants the ability to turn thoughts into reality, he becomes part of an intergalactic peacekeeping force known as the Green Lantern Corps.

Using only his willpower, Hal Jordan must protect the Earth and defeat an ancient and fearful enemy that threatens both mankind and the Corps. To win, Hal must over come great fear and prove his worth as a Green Lantern.
Intention:
The Green Lantern universe is a vast, rich and fascinating place. Unfortunately, the original movie only hints as those intriguing possibilities while it plagues the viewer with a hero who refuses to take up the mantle of the Green Lantern and an incoherent villain.

My intention is to streamline the movie by removing most of the bad dialogue, silly reactions shots and subplots. I have reordered some scenes for a more logical and cohesive storyline, keeping only scenes that progress the plot or develop the characters. By doing so, I hope to transform Hal Jordan into the hero he was meant to be -- the GREATEAT GREEN LANTERN IN THE UNIVERSE!
Other Sources:
- Rising Empire from Immediate Music
- Kara Kul from Mark Petrie
- Entrapment from Groove Addicts & Ninja Tracks - Full Tilt, Michael Nielson
- A Space Journey (HD) from Impermanence
Special Thanks:
A very special thanks to BionicBob for his priceless and greatly appreciated inputs and support, including his incredible art!
Release Information:
Digital
Special Features
NTSC HDTC 1080p 24 High Quality MPEG2
Cuts and Additions:
Summary
• Removed scenes or parts of scenes that were not progressing the storyline or the characters.
• Edited all scenes about Hal refusing to take the mantle of the Green Lantern or telling is not worthy of it.
• Hal feels doubt and fear (a main theme of the movie) about is new role but accepts and embraces it.
• Edited all scenes about Hector since his acting is sadly inconsistent, erratic and all over the place.
• Hector is now a more serious character and surrender to the power of fear, until Parallax arrival that is.
• Reordered a couple of scenes for a more logical and cohesive storyline.
• A LOT of small cuts to remove cliché and bad dialogues and reaction shots. 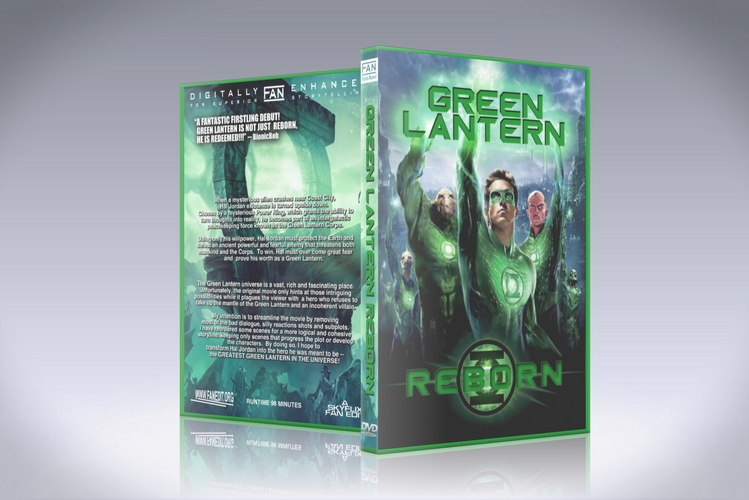 Do you recommend this edit?
Yes
Format Watched?
Digital
F
flounder Top 10 Reviewer 160 reviews
Report this review Comments (0) | Was this review helpful? 0 0
September 02, 2019 (Updated: September 02, 2019)
Overall rating
9.7
Audio/Video Quality
9.0
Visual Editing
9.0
Audio Editing
9.0
Narrative
10.0
Enjoyment
10.0
The trailer for the original release of "Green Lantern" left me uneasy, but I watched the movie anyway, determined to keep an open mind and not to nitpick. I left the cinema underwhelmed. "At least," I said to myself, "the studio did not cast Jack Black in the title role, as was proposed at one stage." Seeing it a second time on a plane, then getting the BD disc, though, confirmed my disappointment.

Great visuals, but complete disrespect for the source material, and the audience. You don't have to be a big fan of the character - and I am not - to think the movie was weak and a loss of great potential. Did Abin Sur's ring really choose the whiniest, most irresponsible man on earth to be a member of an intergalactic space force based on conquering fear? Is it really heroic to not even know the name of the woman you slept with, the day after? In the comics, Hal Jordan was reckless but actually quite strait-laced, a military guy with the "right stuff," not an amazingly annoying guy perfectly capable of wrapping a beloved nephew's birthday present in an old newspaper while driving recklessly at a high speed (and still missing the kid's party). Not a person who would drop out of the Green Lantern Corp because it was a bit tough. The characterisation did not even make sense within the movie itself: so, Jordan can do crazy, brilliant flying but suffers from crippling fear? He can execute super-complex manouevres and has the discipline to train as a top-notch top-gun, but can't set an alarm clock? It's like having Bruce Wayne say "so what?" when he sees a crime, or Peter Parker thinking "Uncle Ben was a douche."

The fanfix is amazing, and 100% proof of what wonders can be done with a nip, a tuck, a plan, a sense of story-telling and an understanding of the source material. Really, its hard to describe how much better this is: the original film was bland (except when irritating), and repetitive rather than compelling and bloated. What we have here is a tight story, with a logical progression; a man facing a challenge realistically, and stepping up, rather than whining and wise-cracking; a soldier in an inter-galactic army where friends die, rather than a spoiled, entitled man-child that leaves you rooting for the bad guys.

Repetition is gone and a tighter edit removes the meandering and bloat; the whining is purged, and the character of Jordan is likeable; the resulting movie, while not the greatest super-hero epic ever, compares well with "Aquaman" and similar fare. The edits are seamless, audio is clean and consistent, and a pretty darn good movie is salvaged. The original was perhaps 4/10 (giving credit to the visuals), but this is, for me, a solid 8/10.

I would happily watch it again, and plan to show it to friends as proof of the power of a fanfix.

Do you recommend this edit?
Yes
Format Watched?
Digital
D
dingo Top 100 Reviewer 42 reviews
Report this review Comments (0) | Was this review helpful? 0 0
July 26, 2019 (Updated: July 26, 2019)
Overall rating
7.2
Audio/Video Quality
9.0
Visual Editing
9.0
Audio Editing
8.0
Narrative
8.0
Enjoyment
6.0
I watched Green Lantern when it first came out (as an old-school fan of the comic character) and was definitely underwhelmed. It actually wasn't a BAD movie, per se, it's just that a lot of little things added up to make it pretty un-compelling by the ending. I just didn't really care about Hal or anyone in the movie and kind of wanted it to be over. Honestly, the most interesting character in the film was Sinestro!

So I was looking for a FanFix that could somehow tweak and massage the movie into a story I cared about, and in this respect, "Reborn" replaces the original on the shelf. However, like many FanFixes, when you fix some issues, it reveals other weaknesses underneath.

SKYflix's many, many cuts to the film edit out a lot of the cheesiness and cliches that plagued the theatrical cut...but not all. The whole script is just riddled with this stuff, and when you take out everything you can, it leaves a basically pretty generic story. I never got into this new Parallax villain from the comics, or all the various colors of Corps that the story is trying to set up for the future, but it's the main concept of the film here. There is stage-setting for Yellow Lanterns, Red Lanterns, Purple Lanterns, and even Blue Lanterns. It's reduced here to background scenes, but still kind of pointless unless you're a fan waiting for those setups. To me, the more compelling story is Hector and Hal's parallel journeys, which we get more of with the inclusion of a deleted scene. However, some of the scene removals take away from this (because a lot of it was cliche) and now Hector and Hal seem a lot more ready to be spiteful to each other than makes sense without the added jealousy over Carol.

A few other points didn't really work for me in this cut. Early on in the film, I actually stopped to look up who the composer was because I found the music so overbearingly on-the-nose. It didn't remember it being that bad, and was surprised to find James Newton Howard scored it, how is usually quite competent.
I saw later that a lot of music was added to this edit from other sources, and I have to say it was too obvious and cheesy for me. The one scene edit in this version of the film that REALLY didn't work for me is Hal suddenly sensing that he has to go barge into a warehouse where Hector is and save everyone. There's no lead-up, and no reaction from Hal to Hector being suddenly monstrous. It seems very disjointed. Finally, I really appreciated that the flashbacks to young Hal and his Dad were abbreviated in this edit. However, we still see them play out too extensively in the middle of a dogfight scene (in a weird tint, no less). This then means that we know exactly what's going to happen to his dad when those same exact scenes play out over 5+ minutes later. I'd rather have had super quick cuts just hinting at a big accident, and we don't find out it was his dad until we see the memories in full.

Supposedly the studio chopped director Martin Campbell's film to pieces and there are tatters of various storylines everywhere, apparent in this cut. Sinestro is basically a racist jerk here, which works fine for an ending payoff. But his journey in the original film is much richer and more interesting, where he serves as rival, mentor, and partner to Hal. The evolution is interesting, and his recognition of and seduction to the yellow power is a compelling element which is sorely missing here. It's also now very apparent that in Campbell's cut, Sinestro and other Lanterns were supposed to help in the final battle. Little elements like this, between the studio's interference and the fan edits, add up to make the movie feel like it's missing story payoffs.

It is however, focused on telling a better narrative, which is firmly on Hal. The comparisons to Top Gun are very easy now, where the son has to come to grips with his father's "failure" and death, and is constantly acting out against authority figures and being called reckless until he deals with those issues. With the story focused this way, however, the omissions of some of Hal's scenes of doubt and fear about his responsibility as a Lantern seem strange. Including at least a few would've aided the story. Without them, many of the scenes on Earth just feel like mundane distractions from the interesting and more original stuff with the Corp.

All in all, this is a superior cut of the film, but it still feels very uneven, and at this point, we've seen many other superhero films tread similar ground better. The audio sync was also off for me in various players, and I finally resorted to adjusting it by .5 in VLC to get it mostly lined up. In the end, if you've never seen Green Lantern, I'd recommend watching this version. But if you're expecting this edit to turn the movie into a compelling rewatch in line with many other superhero films, I'd give it a pass.

Do you recommend this edit?
Yes
Format Watched?
Digital
M
mnkykungfu Top 50 Reviewer 126 reviews
Report this review Comments (0) | Was this review helpful? 0 0
December 01, 2017
Overall rating
8.9
Audio/Video Quality
8.0
Visual Editing
9.0
Audio Editing
7.0
Narrative
10.0
Enjoyment
9.0
Congratulations!! Massive improvement upon the original film. Honestly surprising, almost feels like a different movie. You know what you are doing. The minor problems I had were related to dialogue sound quality and noticeably bad CGI. The CGI is obviously not your fault though. Great Job!