Brief Synopsis:
The Godfather, The Godfather Part 2 and 3 are monumental masterpieces. This Godfather Magnum Opus will over two movies restore all available HD material to a total run time of 602 min. A few minutes never seen in HD, making it the longest possible chronological version ever seen and UNCENSORED! PLUS, the original ending of Part 3, which MUST be in full and not truncated as it was in Coda, has been restored (together with the 14 mins removed from Coda).


Intention:
In 1992, The Godfather Trilogy: 1901-1980 (1992) was released. It features "The Godfather Saga" edit (Part 1 and 2) and The Godfather: Part III (1990) edited in chronological order with additional scenes. This was a VHS release rt 588min. This has never been available in HD and when televised, was heavily censored and in Standard definition only. A few years ago, AMC claimed to have restored it IN HD, but in fact 22 mins were taken up by credit rolls and synopsis and a further 25 min were cut for violence and run time. That over 40 minutes removed. The AMC version ran 580 min in total. I wanted to restore all the cuts AND go in and clean up poor transition, bad music timing on crossfades and even errors in the original which persist in all official versions.
Additional Notes:
The Godfather movies contain many errors which are persistent in all official versions. Apart from restoring all HD censored material to the chronological version, I have also corrected many errors and made a few minor narrative changes to improve the flow.
Other Sources:
The Godfather Trilogy Limited Edition CDs
The Godfather Coda: The death of Michael Corleone
Special features from all Blu ray versions
The Godfather Epic 720 p (unknown source)

Special Thanks:
Gbeditsmovies, jswert123456, Moe_Syzlak, jrWHAG42, Heavysyde, stferguson78, flaminio, asterixsmeagol, sgp1428, grabaham, subjectzero, TheUltimate, Mako and morrigan for following my tortuous thread on this, their feedback, encouragement and support.
Release Information:
Digital
Special Features
Making of videos that were posted in the forum thread on request (since they will not be available on YouTube for much longer)
Editing Details:
As a starting point, I used The Trilogy VHS 580 min version to inform the structure. I then used The official blu rays and the AMC Novel for television for source material. Once the overall 10 hour structure was laid out, I chose to break the movie naturally at what is the end of The Godfather. I then had to rebuild all transitions to create the young Vito chronological flow, with improved music timing, better cross fades and removed all add break fade to blacks. Additional changes are listed below. All captions, subtitles and opening credits are in the correct consistent font throughout.

The Godfather movies contain many errors which are persistent in all official versions. Apart from restoring all HD censored material to the chronological version, I have also corrected many errors and made a few minor narrative changes to improve the flow.
Cuts and Additions:
FILM 2

ADDITIONAL CHANGES over and above added scenes (which are spoilers if you have not seen them, so they come after this, which is spoiler free):

- New establishing shot of Vatican added and 1 min restored to Cardinal. Michael discussion
- All material removed from Coda (13 minutes in total) is restored. All additional Coda shots included.
- Opening montage for Part 3 and original more dramatic ending, restore.
- 3 secs removed for better continuity in the climax.
- All Subtitles replaced for Part 3 and expanded where Italian was not transalated.
- 17 Traveling crop mattes used to create new end titles roll from Part 2 and Part 3 with music re-ordered from both films end credit rolls to match timing.
- New end credit roll composed of 19 travelling crop mattes with re-sequenced music from credit rolls of Part 1 and Part 2
- Fanedit thanks card at the end of the credits

FILM 2
ADDIITIONAL SCENES MICHEAL’s OPUS from The Godfather Part II
- footage of Michael walking on a pier in Lake Tahoe playing with a dog.
- Lake Tahoe caption added in consistent font
- Caption “The day of Anthony Corleones Holy Communiion” added
- There is footage of Anthony's First communion. (NOT in AMC, bizarrely)
- Anthony's party, there is added footage of singing on the grandstand, and in the parking lot.
- Anthony walking up to the button men, and stopping as Kay calls after him.
- Added scene of Fredo and his wife Deanna in the parking lot.
- Added scene of Deanna drunk with Fredo
- Sonny's daughter comes to see Michael for his blessing to marry Gardner Shaw
- After Francesca and Gardner leave, scene about Santino Jr.and football.
- Extra material of Al Neri talking to Michael (with Hagen and Lampone)
- Fabrizio ("Fred Vincent"), leaving his pizzeria in NYC,
- Footage leading up to Pentangeli drinking from the garden hose added and repositioned
- Pentangeli sitting and drinking wine with Anthony.
- Al Neri visiting Meyer Klingman,

The Godfather Part III additional scenes/Shots
- 6 shots newly added to the CODA version of Part 3 are retained
- Additional dialogue between Michael and the Cardinal NOT SEEN IN ANY OTHER VERSION in HD!! (audio from and SD DVD special feature, visuals are re-purposed shots from Part3)
- Corrected continuity establishing shots error
- More thorough translation of subtitles
- all 13 minutes removed for Coda are ratained
- Kay lighting a candles in remembrance (used under the credits for the Novel for television)
- An in Memoriam sequence during the end credit from The Trilogy version 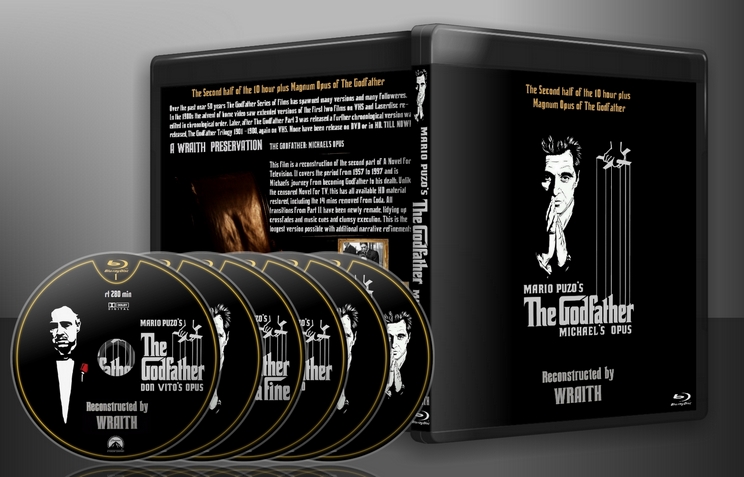 I laughed, i cried i was wrapped up in the world of the Corleone family again for a while and it was a marvel. I have personally never seen a chronological edit before and shoot me down in flames i think i actually preferred it. To concentrate on the ascendance of Vito Corleone without being pulled into Michael's story in part 2 was so much more engaging. Robert De Niro is a master. The inserted scene when Fannuci is trying to marry off his daughters to Vito while helping himself to the dresses was a masterclass in acting and thank god you reinserted this scene into your Opus...just beautiful.

As i am not up to date with the scenes that were reinserted in the various cuts over the years - i can't comment fully but i did look at the supplement disc of my bluray boxset after i watched these edits to jog my memory on what scenes had been omitted from the theatrical versions, and i am thrilled that they now have full pride of place in Opus 1 & 2 . More Clemenza - what is there not to love - but far less (none) Tom Hagen in part 3 was a mistake and i wonder if Copolla regrets the decision not to pay Robert Duvall the wage he wanted.. after all i think he is integral to the story and could have been a real focal point in the culmination ..maybe even taking a bullet for the boss.

I only found a couple of things that pulled me out of the edits and that was your inserted Vegas footage, the first scene of the three looked like the cars were from the 60's or 70's . I could have sworn i see a Dodge hatchback...i maybe wrong and will take another look. I noticed a lot of loud popping and crackling during GF 3 - especially when the helicopter is massacring the Don's , underbosses and soldiers at the hotel meeting. I watched the MP4 versions - i am not sure if this is the case with blurays.

Anyway - thanks for all the hard work you put into making these - they are definitely my new go to versions and bluray's will be burned and placed on the shelf next to my Copolla restoration boxset....i imagine a new 4K set will be released for next years 50th Anniversary.

I love the chronological structure -and dare i say it - as an alternative -someone could probably turn this epic into 10 one hour episodes in a series format or am i taking it too far by saying that. It might appease a less patient audience.

Now "Drop the Gun, grab the Canolli" and contact Wraith for a copy of this masterpiece.
Owner's reply August 15, 2021

Thanks for that. Pleased you enjoyed!
The Vegas intro had some awful issues in the first shot...an extended freeze in the crossfade and a few more issues, so I elected to replace that one shot with some HD material of the strip from the late 60s. I checked out a load of period films like Ocean's 11 and Robin and the 7 Hoods, but just could not find an older shot. So it was this new shot (with Sinatra on the marquee which is nice) or keep the old shot which also had an extended black section with audio and no visual in the original.

L
last-impressions Top 500 Reviewer 11 reviews
Report this review Comments (0) | Was this review helpful? 1 0
July 08, 2021
Overall rating
10.0
Audio/Video Quality
10.0
Visual Editing
10.0
Audio Editing
10.0
Narrative
10.0
Enjoyment
10.0
So, I watched both Don Vito's Opus and Michael's Opus over the course of a long weekend. These are perfect - This is the way these films should be watched. Incredible and highly recommended. Great job on both!