Brief Synopsis:
The Godfather, The Godfather Part 2 and 3 are monumental masterpieces. This Godfather Magnum Opus will over two movies restore all available HD material to a total run time of 602 min, with a few minutes never seen in HD, making it the longest possible chronological version ever seen and UNCENSORED!
Intention:
In 1992, The Godfather Trilogy: 1901-1980 (1992) was released. It features "The Godfather Saga" edit (Part 1 and 2) and The Godfather: Part III (1990) edited in chronological order with additional scenes. This was a VHS release rt 588min. This has never been available in HD and when televised, was heavily censored and in Standard definition only. A few years ago, AMC claimed to have restored it IN HD, but in fact 22 mins were taken up by credit rolls and synopsis and a further 25 min were cut for violence and run time. That over 40 minutes removed. The AMC version ran 580 min in total. I wanted to restore all the cuts AND go in and clean up poor transition, bad music timing on crossfades and even errors in the original which persist in all official versions.
Additional Notes:
The Godfather movies contain many errors which are persistent in all official versions. Apart from restoring all HD censored material to the chronological version, I have also corrected many errors and made a few minor narrative changes to improve the flow.
Other Sources:
Publicly available 1960s video of the Las Vegas strip in HD and color.
Special Thanks:
Moe_Syzlak, jrWHAG42, Heavysyde, stferguson78, flaminio, asterixsmeagol, sgp1428, grabaham, subjectzero, TheUltimate, Mako and morrigan for following my tortuous thread on this, their feedback, encouragement and support.
Release Information:
Digital
Editing Details:
As a starting point, I used The Trilogy VHS 580 min version to inform the structure. I then used The official blu rays and the AMC Novel for television for source material. Once the overall 10 hour structure was laid out, I chose to break the movie naturally at what is the end of The Godfather. I then had to rebuild all transitions to create the young Vito chronological flow, with improved music timing, better cross fades and removed all add break fade to blacks. Additional changes are listed below. All captions, subtitles and opening credits are in the correct consistent font throughout.
Cuts and Additions:
ADDITIONAL CHANGES over and above added scenes (which are spoliers if you have not seen them, so they come after this, which is spoler free):
- All new Paramount Logo
- Fanedit Logo
- All new flicker free opening titles (using actual font grabs from the onscreen version) cleaned up and stabilised
- All new subtitles across all movies in a consistent and the correct font
- Expanded subtitles where transalation is either missing or incorrect
- No massive caption at the opening in Sicily
-New Caption "Corleone, Sicily 1910" and "The Funeral of Anthonio Andolini" added
- Correctly aligned caption crossfade and music from Boy Vito to Young Vito
- Additional music work in Cafe for Vito and Clemenza
- New establishing shots for Young Vito's apartment
- Moved Baby Fredo scene for better flow and character
- Added music sting from CD to jaunty carpet theft music
- Extended walk-off of Young Vito
- Remade audio segue on jump cut to Sicily
- Re-timed baby Fredo scene
- Boy Vito to DeNiro Vito, music re positioned, crossfade re-timed, and reframed for correct alignment of captions
- Don Fanucci to Vito at Apartment. Scene brought forward, shots re-sequenced for better progression, new establishing shot of apartment
- Newly timed fade out of Young Vito and baby Michael on train
- Improved jump cut audio transition of Miami train
- New Vegas transition shots. Two new shots added to better time cross fade, replaced Patti Page marquee with a Sinatra marquee from 1960s HD material. This removes a clumsy crossfade with trees and still frames in the source material.
- Newly made crossfade from Michael and Kay speaking to Funeral (originally segeued to or from young Vito)
- Additional shots of Woltz at studio during gifting thus maintaining an unbroken pan, lost in the AMC version
- Additional compound establishing shot
- Additional looping of actor during Connies argument (which in some versions is ONLY the Italian dialogue) has been removed.
- Re-made and expanded Sollozzo with Michael subtitles where Italian is not translated
- Added shot of Vito in bed after boys visit
- Added extended shot of Tom kissing his wife
- Intermission card of 10 secs added after Cannoli scene (2h 31m)
- Removed duplicate establishing shots at night party and repurposed
- Moved Michael/Anthony bedtime scene to before the incident (as in The Saga edit). Required complete audio rebuild due to 70s blended mix.
- Added 3 shots to closing scene from Part II to make moment more dramatic and add to Kay's distancing from Michael with a slow zoom out
- New end credit roll composed of 19 travelling crop mattes with re-sequenced music from credit rolls of Part 1 and Part 2
_ many other micro tweaks not listed.

- Two of Don Ciccio's thugs arrive at the Andolini home looking for Vito.
- When Vito and Genco go backstage at the theater, there is additional footage of Don Fanucci grabing a young girl.
- Fanucci tells the theater owner that he should have more Sicilian songs and begins to sing.
- While Vito is delivering groceries, he sees three punks over on assaulting Fanucci,
- Discussion of what the attack (moved to later in the running though)
- Beginning of the scene where young Vito and Clemenza are drinking coffee, talking about the carpet Vito is to steal (scene has a pianola backing track NOT in the Theatrical version)
- Vito, Clemenza, and Tessio meet up with a gunsmith
- Clemenza hawking stolen dresses door-to-door for $5 a piece. POst scene is moved to later
- Clemenza tells Vito to bring the rest of the dresses to Dadine's Store,
- While driving, Fanucci hops aboard Vito's truck.
- Added footage at the end of Fanucci's talk with Vito in the truck.
- Added footage at the beginning of the scene where Vito, Clemenza and Tessio are eating spaghetti at Vito's house discussing how to pay Fanucci.
- There is added footage at the beginning of Vito's meeting with Signora Colombo.
- There is added footage during Vito's talk with Signor Roberto on the street.
- There is added footage before we see Signor Roberto at Vito's office.
- first meeting of young Vito and Hyman Suchowsky, but Clemenza calls him "Johnny Lips". This is young Hyman Roth.
- In a trip back to Sicily, there is additional footage of Vito's family exiting the train and walking with a small band.
- While in Sicily, Vito finds and kills two of Don Ciccio's retainers (Mosca and Strollo)
- There is additional footage of Vito and his family at the train station leaving Sicily.

- After Vito agrees to help Bonaser avenge the beating of his daughter,
- After Vito tells Hagen to go to California, Hagen tells him that the hospital called and the dying Genco Abbandando,
- After Connie's wedding reception, Vito, his sons, and Johnny Fontane go to the hospital to visit Genco,
- After a short conversation, Genco becomes weak, and Vito motions for his sons to leave the room, (additional shot addedtoo)
- Before Hagen and Jack Woltz start talking, Woltz holds a birthday party for a young actress
- After Woltz kicks Tom out after dinner, he walks to the exit, looks up, and sees Janie, crying at the top of the staircase,
- There is additional footage of Tom, Sonny and Vito discussing the Woltz situation before the horse head scene.
- Michael and Kay are in a New York hotel bed, getting a wake-up call at 3 p.m.
- There is some short extra footage of Luca Brasi walking through the hotel hallways before meeting with the Tattaglias.
- After the shooting, Sonny gets a phone call from a detective informing him
- After Sonny gets the call from Virgil Sollozzo informing him about the abduction
- There is some short extra footage of Michael in the car arriving at the mall
- After Michael meets Clemenza, he asks Hagen's wife Theresa how he is.
- After discussing Hagen enters the room.
- Before Clemenza leaves the house with Paulie, he and Rocco Lampone talk about Clemenza's car (an additional longer shot of the car)
- After they leave Clemenza's driveway, they make a stop "to call Sonny".
- Clemenza eats a meal and buys cannoli while Lampone and Gatto wait in the car.
- When Michael is hiding in Sicily, there is a scene in which his bodyguard Fabrizio asks him about New York,
- In Sicily Michael and his bodyguards see a procession of Commies marching through the hills.
- Michael visits his father's birthplace
- After Hagen makes the call to Bonasera additional scene
- After Apollonia incident there is a short scene of Michael in bed,
- After Connie hangs up the phone she walks into the bathroom where Carlo is showering (TV looping removed).
- Before Hagen asks Michael why he is being replaced as consigliere, there is some short extra footage.
- Extra footage after Michael says "You're out, Tom." These two short scenes talk about Al Neri.
- After Hagen leaves the room, Vito takes Michael out to the garden through the French doors in the study. 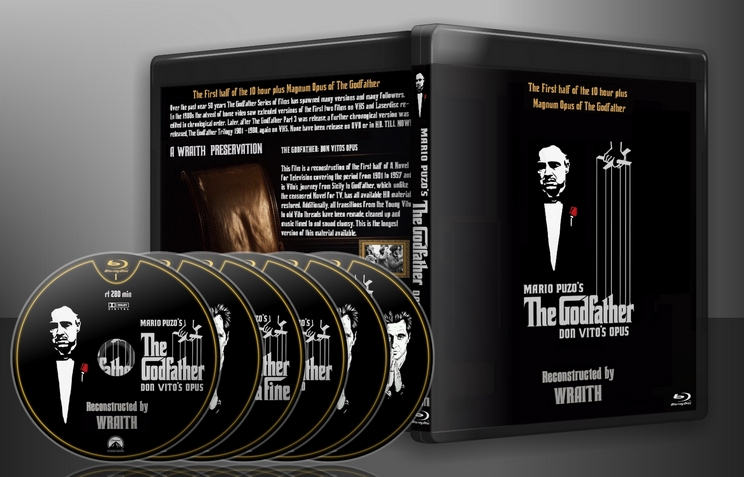 Thanks for that. You are first off the block, Appreciated - W