Brief Synopsis:
A more straight to the point, less "Bayish" version of The Island.
Intention:
To retain more of an air of mystery in the early stages of the story, rather than having the audience an hour ahead of the characters. 2. To make this Lincoln’s story as much as possible. He’s the anchor, so anything that detracts from that is less important. 3. To trim away some of Bay’s hideously in-your-face product placement.
Release Information:
Cuts and Additions:
New company logos and titles.

Removed several on-screen credits during opening minutes of the film.

Removed Lincoln complaining about his missing shoe and cut to monitoring stations.

Removed Gandu talking about how long he’s been waiting to go to The Island, and what a loser he is. Only serves to highlight that the agnates ages do not correspond to their designation, despite what McCord later claims.

Removed food server telling off Lincoln, and fellow agnate telling him to “Move it.”

Removed Jordan2Delta gloating towards Lincoln about getting the bacon, and some of her interaction with the food server. In this way, Jordan seems to be getting the bacon for herself, but ends up giving it to Lincoln. It comes across as less sneaky, and just a nice gesture on her part.

Removed shot of Merrick with film crew reflected in his glasses.

Removed Jones saying “Divided by, multiplied by” like, a thousand friggin’ times. I actually quite like Jones, but this little moment really gives me the shits.

Removed XBOX game sequence, and subsequent reference to it during the following scene.

Removed nurse raving about how much she loves Starkweather, and Lima’s baby being delivered to the “mother”.

Removed Lincoln and Jordan going into agnate chamber during their escape, and fighting the censors.

Removed Lincoln’s, “He’s taking a dump in a can.” & Jordan’s idiocy over the bartender’s question, “Straight up?”

Removed hillbilly catching Lincoln and Mac in the bathroom.

Removed Mac’s wife completely. Sorry, Shawnee. I gots no time for your foolishness, so you’re out of here. Also, not knowing if McCord is married kinda makes the maid outfit in his closet all the funnier. (What, just me? Oh well.)

Removed a lot of Mac’s beating around the bush before telling Lincoln and Jordan that they are clones.

Removed Mac’s claim that there are only twelve stories mixed and matched amongst the agnates. A population that large, it’s not believable that none of the agnates ever noticed the coincidence.

After Jordan fires a nail into the wall, trimmed out Lincoln pulling it out with his bare hands.

Removed quick cut back to guy with nails through his hand.

Removed shot of armoured car with damage on the front prior to it getting damaged.

Erased visible camera in the shot just after the cop car gets slammed.

Removed shot of undamaged armoured car after it has been damaged.

Removed Laurent ordering his men to, “Silently take them out!” Ain’t nothing remotely silent about their methods, before or after this point.

There were two shots where it was painfully obvious that the crashing train wheels were rubber. Now fixed.

Reframed shot of truck crashing into railing. (The original shot goes off-centre due to the impact.)

Reframed shot of Black Wasp rider with missing image on the left side of the shot.

Did minor wire removal work on the shot of the Black Wasp sliding to a stop.

Removed one shot with an obvious stunt double for Jordan, and another that had doubles for both Jordan and Lincoln.

Removed Laurent telling his team, “If there’s no way to get our fugitives quietly, you need to take them out.”

Removed brief moment of quiet in the elevator.

Removed Merrick murdering Gandu3Echo. Gandu is visible in several shots later in the film, and the scene is really just an attempt to make Merrick more loathsome to an audience, which is unnecessary.

Removed Tom Lincoln yelling, “And what are you doing in my house?!”

Removed Tom calling Merrick Biotech and telling them that Lincoln is with him. This way, there’s at least a tiny bit of doubt as to whose side Tom is on.

Erased ‘previous take’ skids on road, and removed diagonal markings which give away how fake the freeway really is. (Also trimmed several frames here and there to do the same.)

Fixed continuity of Tom’s car being further away than it should be in each shot when they speed off.

Removed shot of truck driving in same direction as Lincoln. It’s seen driving the opposite way in the very next shot.

Removed Lincoln biting Tom’s finger. It’s clear he’s not biting down much at all.

Restructured and shortened the “I’m Tom Lincoln!” standoff. Removes Lincoln6Echo taking so long to realise he should play along, and removed Lincoln6Echo putting the wristband on Tom right in front of everyone. (Which is just plain stupid.) Now, Lincoln slipped it onto him during the scuffle. No one notices until Tom smacks Lincoln in the head with his pistol, which brings the wristband out from under his sleeve.

Removed sex scene. We don’t need to see it to know it happened, and it’s such a cheesy, soft-filter sex scene that it’s unintentionally funny.

Removed Whitman’s prattling on when calling “Tom” Lincoln at home. Just get to the point, little man.

Added Renovatio into the background of one shot where it was missing.

Removed Lincoln telling Jordan all about his plan.

Removed computer scan graphic when Jordan buys ice-cream. It’s a steal from earlier in the film, and unnecessary.

Mirror-imaged shot of Lincoln in Merrick helicopter for continuity. His wound is on the wrong side.

Removed all Laurent material once he delivers Jordan. His ‘sympathetic villain’ bit is such a cliché, and I don’t care about his character at all, so taking him out helps once again to make this Lincoln’s story.

Removed all Lincoln versus Merrick material. Lincoln just shuts down the place instead.

Re-arranged the scenes leading up to the fan’s destruction. 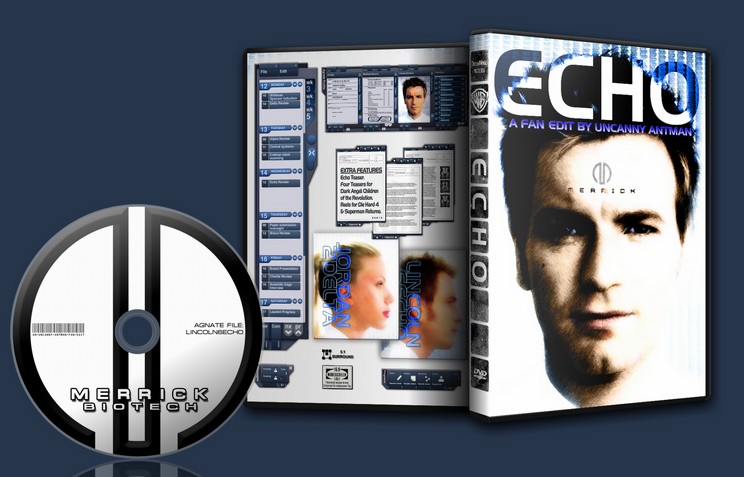 I might have trimmed a few more of the stupid, sexist Michael Bay jokes but that's really all I can say negative about this edit. Very well done.

*This rating was given before reviews were required*
L
link Top 50 Reviewer 58 reviews
Report this review Comments (0) | Was this review helpful? 0 0
View all user reviews