Otherwise, cut-list and changes are the same as the 480p version listed here: https://ifdb.fanedit.org/dune-1984-the-alternative-edition-redux-480p-edition/
Cover art 1 by ArtisDead (DOWNLOAD HERE) 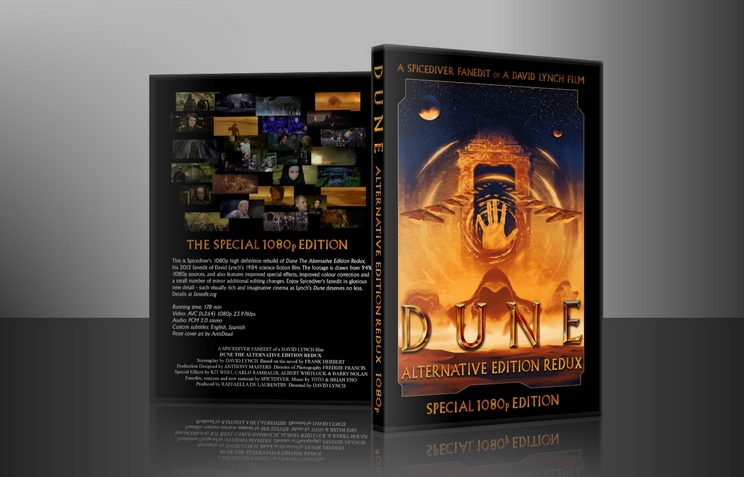 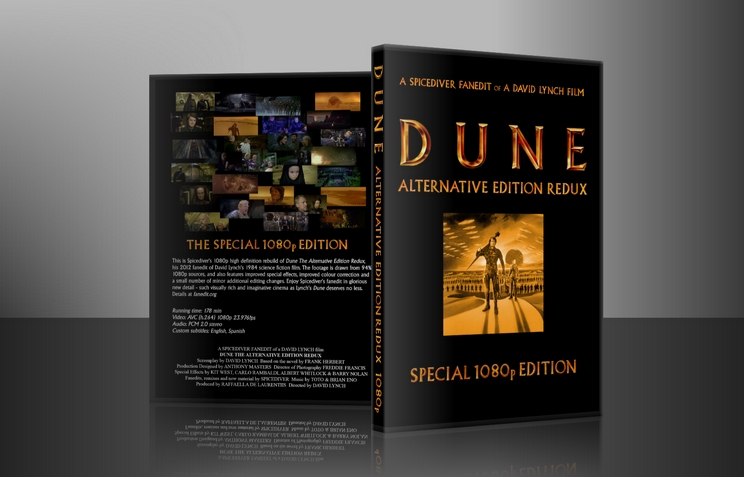 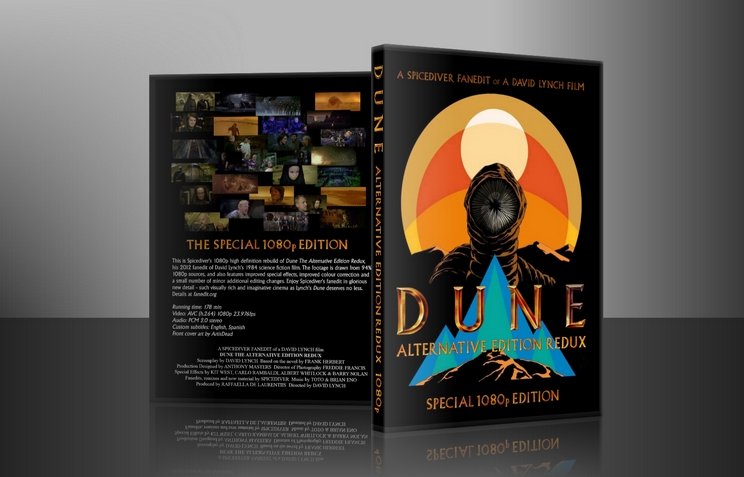 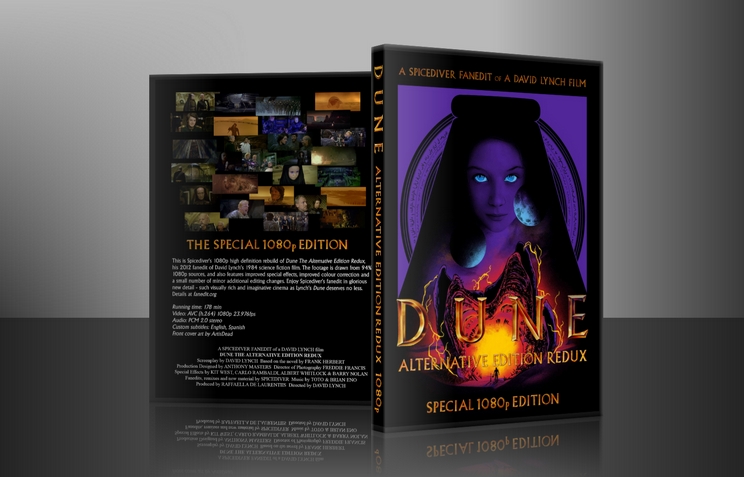 With the Dune 1080p special edition, Spicediver has managed to integrate additional scenes seamlessly into the film. The editing, musical cues, sound effects all flow perfectly to where the viewer doesn't even know where changes have been made.

While a very tiny portion of scenes inserted vary in quality because of source limitations, I did not find that to distract from my overall enjoyment of the presentation. The additional footage really helps build the world of Dune along with adding more detail back into the overall narrative. It also gives you a better idea, and appreciation, of the scope that Lynch had in mind when setting out to tell this story.

Thank you for all the time, thought and effort into making this cut. I highly recommend it!

*the HD upgrade is, needless to say, amazing, and even the SD upscaled extended footage feels less jarring.

*any new changes are fully integrated and seamless. I know this edit quite well, more than any other fanedit out there, and I was looking for the changes but couldn’t easily pick them out.

*Finally, a quick shout-out to Spicediver for his thoughtful and engaging messages, consideration, and willingness to pragmatically look at Lynch’s film as a project in perpetual need for retooling.

Having just recently read the book again, it’s amazing how well Lynch captured so many difficult aspects of the novel. People call Dune “unfilmable” due to this, but he did well.

In watching this edit, there is a “Magnificent Ambersons” effect at about the start of book 3, where the careful, steady, almost slow-burn Lynch/Spicediver use through the first 2 hours becomes a rapid-fire series of melting psychedelic dissolve shots, telling an epic story in its last hour in a series of impressionistic images more than narrative.

The characters are all too human in this story. That’s the subversive secret of Herbert’s novel: despite the evolution, these characters are completely and utterly bound by their ultimate humanity, and haven’t the perspective to see through it.

When Alia intones this film’s final line, Spicediver was right to eliminate the original ending of the movie. Paul can’t make it rain. He’s just the ultimate psychedelic dude, is all.

Thanks for the review. :)

Just to clarify for viewers: the additional footage that I used from the 'Alan Smithee' Extended TV Edition is not upscaled; it is an actual 1080p source that was released for the first-time ever in 2022 on the German Ultimate Edition Blu-ray set. Only the rough deleted scenes in 360i resolution that first appeared in 2006 have been upscaled in Dune Redux.

If any of the Extended TV Edition footage used in my 1080p edition ever looks a tad lower resolution, it's because when it was cobbled together for American cable TV in the late 1980's all the newly re-inserted footage was inexplicably zoomed-in slightly. If you carefully watch the intercutting in some scenes, you can see the slightly different sizing of subjects within the frame. Alas, that's part of the legacy of the TV Edition's weird and shoddy production by Universal/MCA.

Say what you like about Lynch's Dune, but you can't knock it for its ambition. A cinematic interpretation of a novel so intricately crafted some said it was impossible to translate, and indeed Jacobs, Jodorowsky and Scott had already tried and failed. De Laurentiis turned to surrealist director David Lynch, who, despite having never read the books, almost immediately signed on. A three-hour epic featuring an all-star cast (including the film debut of Kyle McLachlan) with 80 sets built across 16 sound stages. Unfortunately, a combination of factors led to an underwhelming and undercooked theatrical release, and Lynch has thus far refused to participate in further cuts of the film.

Spicediver takes as much of the existing material that remains and compiled them into four distinct chapters. The audio editing is almost entirely seamless, as is the video editing (the only time you really notice is when it cuts to footage from the assembly cut footage). The structure is a vast improvement over any cut I've ever seen, with so much more detail and worldbuilding added back into the film. The extended runtime gives so much more room to appreciate the scope of the story Lynch was trying to tell, and undoubtedly would have told much better if he and Dino had gone with the two or three parter originally intended. Even with these changes it's never going to be the most faithful adaptation, but the additional context does wonders.

My only gripe with the edit is that the new ending is a bit underwhelming. I'd have thought there would at least be some way to foreshadow the coming holy war expanded upon in Herbert's sequels, but what happens instead feels something of a non sequitur.

TL;DR - the best edit of Lynch's Dune to date, now in 1080p. I think spicediver might be the Kwisatz Haderach.

Thanks for the thoughtful review.

Lynch did indeed script and film that narrative thread concerning Paul's fears and ambivalence about the holy war that his victory over Shadam would unleash. It was all cut out, unfortunately. The only deleted scene that's been released is of Paul having a nightmare about it - nothing else. So inserting that scene in the film would make no narrative sense because all the context around it is still missing.

It's a real shame we don't have those scenes, because it would restore much needed depth to the film's second half. As it stands now, Paul's only fear in the Lynch film is whether he will survive the Water of Life.

But spicediver's Dune Alternative Edition Redux / 480p version revealed one of the biggest flaws that I saw with the theatrical cut: it was too short. Spicediver fixed the issue by adding many deleted scenes and created a new structure to the movie which I loved.

When I heard that a 1080p version was released, it gave me a chance to rewatch the movie. Basically this version is the same fantastic fan edit I saw some time ago, but just a little bit better thanks to minor changes and a better resolution.

Thank you for reminding the fan edit community, why your edit is still an important part of fan edits and should be for a long time. Thanks for making this edit, spicediver!

Do you recommend this edit?
Yes
Format Watched?
Digital
A
arpeggio-0563210 Top 500 Reviewer 12 reviews
Report this review Comments (0) | Was this review helpful? 2 0
View all user reviews