Brief Synopsis:
The Doctor and his companions face off against deadly Daleks and the rampaging River Song in two specially edited adventures set against the backdrop of World War II.
Intention:
Victory of the Daleks: this is a minimalist 30-minute cut of Victory of the Daleks, Mark Gatiss’ first major script for the Moffat era and the second big letdown of the series one episode after The Beast Below. The signs were all there from the two that trouble was brewing, but fortunately the rest of the series was top notch quality and spared such thoughts from manifesting in most fans’s minds until the mass bungling of the latter half of series six.

Victory of the Daleks biggest crime is the New Dalek Paradigm, aka the Teletubby Dalek Rangers…which I couldn’t remove. If I could, I would, I swear[/George Micheal], so I decided to make do with removing the other big misfire of the story…Bracewell, the Dalek-enginerred scientist who “develops” the gorgeous looking Ironside Daleks (why didn’t Moffat keep them on?) is revealed to be a living bomb.

What happens next is a truly despicable bit of emotionally manipulative storytelling where the power of love saves the day for the first time in the Moffat era. It’s time consuming filler designed purely to drag out the Daleks’ inevitable escape and nothing more, so off it goes.

Let's Kill Hitler: When certain events in history happen, people always reflect on where they were at the time.

For me, I recall exactly where I was when Let’s Kill Hitler went out…it had been my parent’s silver wedding anniversary, we had a grand old tea at a swank little inn and many family members came back to the family homestead for a few drinks and a bit of chatter. I had to watch the episode in my bedroom along with my cousin and little brother. At one point, an uncle joined in.

This, for many, is where not only series six went wrong, but you got the distinct feeling DW’s days as the “cool” thing to watch were numbered in the years to come.

It took a year for it to sink in, but this was it. The first post-hiatus episode following the gripping “A Good Man Goes to War” and what did we get? A flipping River Song rom-com disguised as an origin story. If anyone watching the show had a pre-existing distaste for Alex Kingston’s performance, their tempers were not quelled by this.

For all the ham, the comedy, the “clever lie” bit which deconstructs the temporal grace of the TARDIS, and the gimmicky misleading title which doesn’t involve the tantalizing time travel conundrum of what to do with Adolf if you met him, it’s a very energetic script, it does offer some insights into what the Silence are, and the Tesselecta is a great concept, albiet more for the time travel modus operandi than ripping off the Numbskulls in the Beano.

I may enjoy a lot of this episode, but make no mistake, this is where series six died a gurning death over the course of 45 minutes and the Moffat era was never regarded in quite the same light again.

You can enjoy something, but you must always be aware of it’s faults so you can understand the side who trash it and not callously dismiss them in the name of the 10/10 club mentality that think the whole series is sunshine and rainbows. You see this all the time in certain Whovian podcasts on Youtube and reaction channels, save for maybe two (Zaredit personally recommends Blindwave and Seskasays for some proper analysis)

Ah, but there wouldn’t be an edit if there wasn’t something to cut now would it? And there was a lot to go, making this, the second of my World War II themed edits, to run at a considerably shorter run time, this one clocking in at 35 minutes.

- Also gone is the ending with Amy’s crack forming just as the TARDIS dematerializes, just to give this episode more of a one-and-done feel.

- Let's Kill Hitler: The episode begins with the way it should have, with Hitler at the front and center of the action. If you’re going to mishandle the furher, at least make it seem like he’s important…set up a bit of a mystery as to what the Tesselecta want with him, and give the Doctor a massively impactful entrance with the TARDIS crashing through…then have the titles come as Hitler, sodding Hitler, thanks our intrepid travelers for saving his life. DUN-DUN-DUNNNNNNNNNN.

- Gone too is the creation of the crop circle summons and the introduction of Mels in the stolen car, and the flashbacks to her childhood with Amy and Rory. All you need to know from the moment Mels is released from prison is that she’s a friend of the family, she set Amy and Rory up together, and she’s trouble.

- Afterwards, one of the last things to go was the ultimate in time-wasting filler, where Matt Smith does a little bit of self-sabotaging and diminishes the enigmatic performance of his Doctor by indulging in a childish tantrum about guilt and yelling out fish fingers and custard a gazillion times to really emphasize to the whole audience that Doctor Who serves the children’s whims above the adults or the family.

- And that’s your lot. Episode ends on the Doctor handing River her diary and the Doctor/Song ‘ship era is well and truly set to sail in a few filler’s time.
Double Bill Cover art by Zarius (DOWNLOAD HERE) 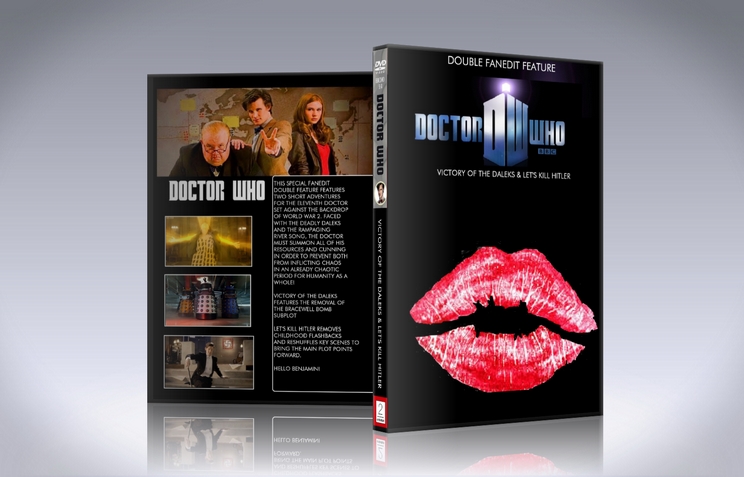 Victory of the Daleks Cover art by Zarius (DOWNLOAD HERE) 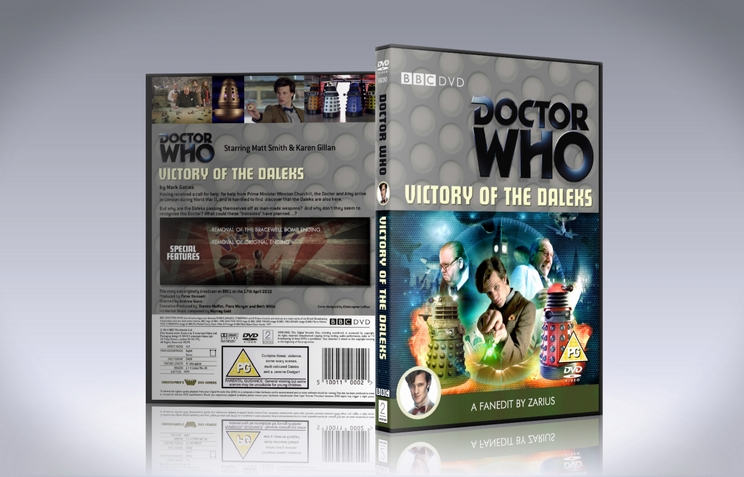 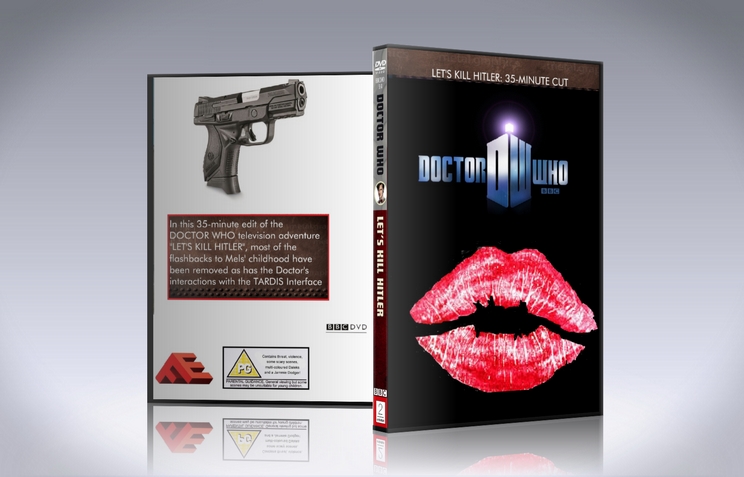