Doctor Who - The Pilot (Extremis Edition)

Brief Synopsis:
The Doctor meets his new assistants, Nardole and Bill, as he begins to honor a promise to look over a fallen friend for a thousand years.
Intention:
This edit mergers the first episode of Doctor Who's tenth series with three other episodes from that particular series, removing all the pretentious teasing of what's inside The Vault that goes ultimately nowhere and has an obvious reveal handed to us within minutes of the episode

Extremis is the first part of the Monk trilogy, which really isn't that much to write home about, other than virtually any scene that includes Michelle Gomez. It is that scenery chewing that compels me also to use the last few precious minutes of "The Lie Of the Land", the conclusion to the trilogy, as a coda to this episode, replacing the original ending with The Doctor trying to wipe Bill's mind of her adventure.

I've also decided to insert Bill and her friends finding a new house to live in from the episode "Knock, Knock". This particular plot point doesn't actually go anywhere in this edit, it's just a nice little set up that gives us more of a slice of life with Bill, plus I like the atmosphere of Bill with mates more than putting up with her step-mum.

Other Sources:
- Doctor Who Series 10 DVD
Release Information:
Digital
Cuts and Additions:
- Begin with original pre-credits scene from "The Pilot"
- After titles, we play some footage from "Extremis"
- "Knock Knock" footage takes over after Missy tells The Doctor to let her live
- Just as Bill is hesitant to sign the contract to move into the house, we cut to The Doctor's "Time" lecture. Producer and director credit scenes cut
- We cut to "Extremis" footage after The Doctor says "It means life"
- We cut back to "The Pilot" after Nardole tells The Doctor he can kick his arse
- We cut back to "Extremis" after the Puddle establishes the link with the pilot
- White flash cross fade from "Extremis" to Christmas at the University in "The Pilot"
- Cut Heather meeting Bill outside the university and repeating what she says
- Cut the TARDIS landing in Australia
- Last of the "Extremis" footage plays after Bill notices her tears
- "Lie of the Land" ending used as final scene
Cover art by Zarius (DOWNLOAD HERE) 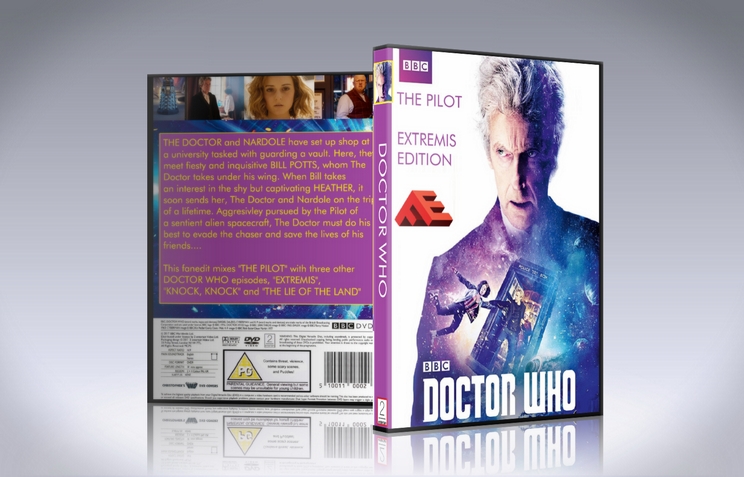