Doctor Who - The Day of the Doctor: Gallifrey Falls

Brief Synopsis:
The Moment has come, and the Doctor must decide what kind of men he is fated to become
Intention:
In this edition, Gallifrey is destroyed rather than saved
Other Sources:
Doctor Who - Day of the Doctor DVD
Release Information:
Digital
Cuts and Additions:
- The episode now begins with the unveiling of the Gallifrey falls painting and the titles follow Matt saying "the day I killed them all", we have a shortened version of the RTD Doctor Who theme and titles, and then back to the museum for more of the story.
- I decided to hold back on the War Doctor's introductution scene until the time came to meet up with The Moment and collect the Fez. Luckilly, there's a perfect moment to bridge from Ten and Eleven meeting to the fall of Arcadia just as Ten says "so where did it go?"
- The destruction of Gallifrey originally came about in my last edit when Clara was talking to the War Doctor and noticed he'd vanish from the chair, but in this version we get to see Hurt actually trigger the big red button that leads to the obliteration of the planet.
- Most of the story is the same, I opted to also omit any scene with the painting of Elizabeth and Ten getting smashed in by the invading Zygons for reasons that become quite clear at the end. I was never really satisfied with how Whoflix ended his edit of Day of the Doctor, and thought it needed a better closing shot than just Ten's TARDIS dematerialzing, so I spared the painting shot so we could have a quick pan over to it one more time..
Cover art by Zarius (DOWNLOAD HERE) 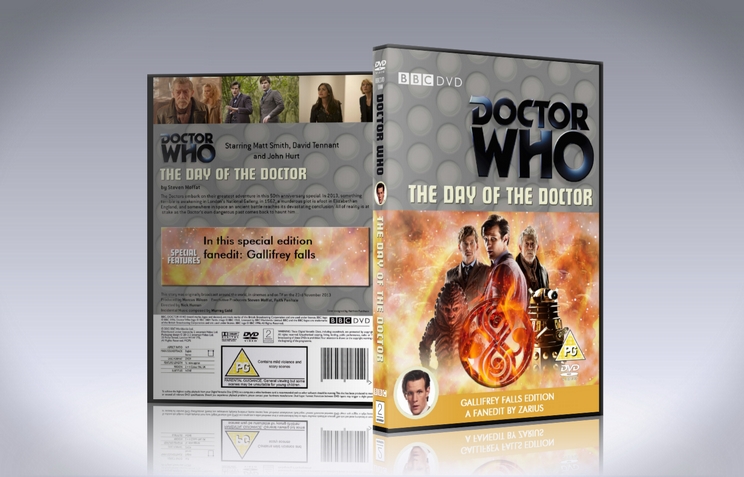