Brief Synopsis:
This edit attempts to take 1995's 'Judge Dredd' closer to what might have been if Director Danny Cannon had been given total creative freedom. Without the interference from his producers and his mega-star Slyvester Stallone, could we have got a real Dredd movie that reflected the tone of the source material? Could it have been more like 2012's awesome 'Dredd'? Let's find out!
Intention:
My intention was:

1. To cut Stallone's performance as Dredd in a way that brings him inline with the Dredd from the comics. Almost every shot showing any emotion beyond anger is gone, his silly catchphrase is gone and of course his romance with Hershey is entirely removed.

2. To cut Rob Schneider's character down a minimum since he essentially destroys any tention that the film is building. He constantly makes light of what are supposed to be life-threatening situations, he is generally loud and annoying, he pulls stupid faces and waves his arms around... in short, he is the Jar-Jar Binks of this movie.

3. To restore Manic Street Preachers' 'Judge Yr'self' to it's proper place as the finale music for the film.

4. To generally make the tone more serious while still keeping the action fun.
Additional Notes:
My intention was never to remove every frame of Rob Schneider at the expense of continuity. He now serves a purpose and that is to be an irritant for Dredd. If he speaks Dredd shoots him an angry look, this helps make Dredd's character more aggressive. He also ultimately proves useful in the end.
Other Sources:
Judge Dredd Blu-Ray
Judge Dredd CD Soundtrack
Manic Street Preachers - Lipstick Traces CD Compilation
Colin MacNeil comic artwork circa the early 90s
Special Thanks:
Thanks to all those on the DCJD thread who gave their feedback and previewed clips and workprints.
Release Information:
Digital
Special Features
Trailer, DC's original poster, artwork, cutlist and featurette included.
Editing Details:
General Cutlist:

- Slightly de-saturated, darkened and increased the contrast of the image throughout. The look is now more gritty and sombre while the Judge's costumes look less like blue-spandex
- Removed almost every shot of Stallone's face that showed internal conflict, sadness, happiness or any emotion other than barely suppressed anger
- Removed Hershey/love subplot, they're like Cop partners... that's it (NO KISS!)
- Removed as much Rob Schneider as I believe is possible without causing continuity/narrative problems. However, I have retained many instances when he says something annoying and then Dredd gets angry with him (Dredd getting angry is good for the movie!)
- Removed all footage of Rob Schneider making light of the supposedly dangerous situations he is in. Including being shot, burned alive, murdered, eaten by cannibals and worst of all, joking around while he's critically inured from a gunshot wound to the stomach. Schneider's antics destroy the tension in all those moments.
- Stallone's heavily repeated "I knew you'd do/say that" catchphrase removed (He now says those words once only) 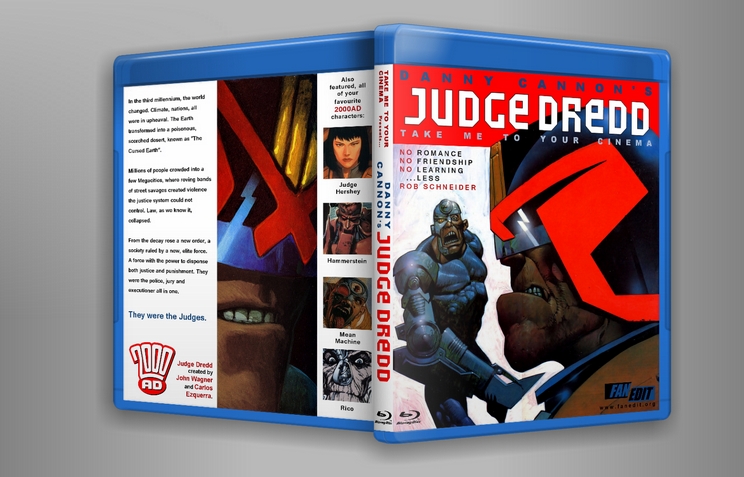 14 reviews
9-10 stars
79%
7-9 stars
21%
5-7 stars
0%
3-5 stars
0%
1-3 stars
0%
Overall rating
9.3
Audio/Video Quality
9.7(14)
Visual Editing
9.3(14)
Audio Editing
8.9(14)
Narrative
8.9(14)
Enjoyment
9.4(14)
View all user reviews View most helpful
March 02, 2022
Overall rating
9.2
Audio/Video Quality
10.0
Visual Editing
9.0
Audio Editing
10.0
Narrative
9.0
Enjoyment
9.0
A terrific package, with extra documentary footage explaining Dredd's backstory to newcomers and casual fans, as well as the history of the troubled production of Judge Dredd. The movie still amounts to Blade Runner for meatheads, but that's not necessarily a bad thing, and with Rob Schneider pared down, it is a throughly watchable actioner, with genuine love of 2000AD visible in the art direction of every frame. As usual, TM2YC does an immaculate job with the editing and gives us a Dredd movie that deserves a spot on your shelf next to the tremendous (yet too dour, which this one at least doesn't have that problem) Karl Urban reboot/sequel.

Do you recommend this edit?
Yes
Format Watched?
Digital
R
recordwrangler95 Top 10 Reviewer 136 reviews
Report this review Comments (0) | Was this review helpful? 1 0
April 14, 2021
Overall rating
9.9
Audio/Video Quality
10.0
Visual Editing
10.0
Audio Editing
9.0
Narrative
10.0
Enjoyment
10.0
Loved this version so much! It's better than the original with all its goofy moments. Amazing job!

The 1994 Stallone "Judge Dredd" movie was, to say the least, a massive misfire. It ditched a lot of the core mythos that made the Dreddverse interesting. It tried to lighten the mood using Rob Schneider. And it ended up with a generic, not-very-good and not-very-bad future cop movie, barely memorable at that. This, despite a massive budget. It got nowhere, irritating fans but too bland to attract other audiences, despite the star power of Stallone.

The universe of Dredd is a mixture of grimdark and plain old strange: it is a dystopian urban future with 90% unemployment, tower blocks of up to 100,000 people each, mega-cities of up of to 800 million each, school subjects like Unemployment ("what are you going to do, when you have nothing to do?"), profound alienation, celebrity culture and TV as the main influencers, and society held together by a police state of Judges. The Judges come to power (in the former US, at least) through a coup d'etat by the Justice Department, in a world ending in nuclear war; they are empowered to execute on the spot; are inflexible and zero-tolerance, this including jailing people for unlicensed gold fish, littering and suicide ("self-homicide"), and reading anything from the 20th century, such as celeb news on the "Dallas" TV show and the Dredd/ 2000AD comics; there are no juries, no appeals, no lawyers, no apologies. Judges make up around half of the employed, may not marry or have kids, and live (in the later stories) in chapter houses or precincts, a sort of monastic knighthood imposing The Law. There is no free speech, the Mayor is a figurehead, there is an official ban on pre-Judge history, ongoing purges of mutants and aliens by the state; pro-democracy protesters are massacred or lobotimised. A lot of crime is extremely brutal and most of it is completely pointless "("I was bored") or a revolt against the misery.

Within this grimdark world, though, a lot of the stories are satirical, humorous or philosophical: is the system fascist? is the system a model we should emulate? is democracy workable? why does society love a man whose hobby is to grow the biggest nose in history and have his own TV show? In one story, where a gang smashes cleaning robots and takes over the job of mopping floors: "I'm ... I'm working! Actually working!" Dredd, the titular character, is The Law, literally: the most incorruptible cop, inflexible, without a personal life; he does not even have a face (well, its never shown, ever, he is always helmeted); he's a clone of one of the founding Judges, literally bred for The Law. He is, though, reflective: in a notable arc, he begins to doubt whether it is correct to crush the pro-democracy people, and pushes for a democratic referendum (most people, in the end, don't bother to vote, having no interest in the issues, and of the voters, most want the Judges); in another story, he sentences the mopping gang to 10 years hard labour ("Thank you, Dredd! I don;t care what people say, you do have a heart!")

And then ... we have the Stallone "Judge Dredd": Dredd is now an odd cop, a Dirty Harry outlier rather than the exemplar in a world where Dirty Harry would be seen as a bit soft on crime; his sentencing of crime in the movie is emotional and nuts e.g. blowing up a car for a parking offence, rather than jailing the perp for defying The Law; there is, bizarrely, a free press that calls out the Judges and gets Dredd fired; we have juries and lawyers, which undermines the entire premise of the Dreddverse and the rationale for the Judge system; laws are bent as personal favours and through trade-offs, as at Dredd's sentencing; Dredd is an arrogant blowhard, rather than a humorless cypher; there is romance in the ranks, as with Dredd and Hershey; we see Dredd's face every possible chance; and we have Schneider all over the place. There is no sense of the larger social context: if you were not a fan, you would probably not know that this is a society held together by terror and TV, a harsh dictatorship in a decaying city, leaving with the impression that its a recognisable future, albeit one where cops are a bit more militarised than today, and have cool flying bikes. And here, Dredd-gets-the-girl-with-a-smooch-and-visits-her-apartment replaces the reality that Dredd-and-Hershey-live-in-barracks-and-would-get-sent-to-a-gulag-on-Titan-for-smooching.

This edit helps set things right, with a proper introduction, no wisecracking (or smiling,, or even hinting at a smile) on the part of Dredd, as little Schneider as possible, the Dredd/ Hershey romance gone, and loads of tweaks and edits that change the mood, the narrative, the characterisation, and remove the most jarring inconsistencies with the lore ... and a film you can watch and enjoy, not just as a fan of Dredd.

As the pitch for the fanedit says: "No romance, no learning, no friendship, and less Rob Schneider."

Hey thanks for the thoughtful review Dingo. I really enjoyed reading that and your summation of what makes Dredd tick is dead on. "a world where Dirty Harry would be seen as a bit soft on crime" :-D