A terror from space had crash-landed in America's heartland, and it carving a path of death and destruction where ever it goes! Colonel Steve Austin must solve the mystery of this Death Probe and find a way to stop it before more lives are lost!

Bonus Feature:
Revenge Of The Death Probe
It's back!!! The Death Probe returns to wreak havoc and once again our weary bionic hero must give chase and stop the marauding machine!
Intention:
For Death From Venus, I wanted to create the episode I "remembered" rather than the episode that actually exists...LOL! I wanted something that moved at a faster, tension filled pace with a greater sense of jeopardy. So I removed all filler subplots and kept the focus on Steve battling the Venus Probe. Also, to up the threat level, this DEATH Probe actually will and does KILL.

For Revenge of the Death Probe, well, the two parter is absolutely terrible, so I cut pretty everything! The micro-adventure is only 18 minutes long (over 82 minutes cut) -- it is just big chase with lots of new music added to hold it all together. Note: this two parter does not seem to be remastered by TimeLife; the video quality is very poor, with many scenes out of focus and fluctuating colours.

Special Thanks:
Note: Special thanks to Rogue-theX who created the original dvd art template. And a big acknowledgement to youtuber Stiks1969 who recreated many of the Oliver Nelson tracks used in this edit.

Release Information:
DVD
Special Features
Bonus Micro-Episode: Revenge of the Death Probe
About This Edit
Trailer
Cuts and Additions:
-Cut Steve being awaken in bed during teaser, being inform of the Probe as the scene is basically repeated again later in Oscar's office.
--recut the first appearance of the Death Probe, lots of little trims so it moves faster, and this time it earns its name by killing the farmer and hopefully making the jeopardy feel more warranted
--cut the entire subplot of Russian Sleeper agents in America and them investigating the farmer, not needed since the farmer is now dead.
--trimmed Oscar's office briefing, so now it sounds like they know something has landed and they are mobilizing to investigate.
--cut flashback to Doomsday and Counting... if you want to know how Steve met Irena, then you are just going to have to watch CYBORG 6... so there! lol
--lots of little trims to Steve's first battle with the Probe to make it faster paced, also added Steve's action theme to it.
--cut the cliffhanger ending
--for cliffhanger continuity, cut Steve fencing with Venus Probe
--cut John "Q" De lancie fainting
--lots of trims to the very long evacuation scene
--lots of little trims to Steve's second battle with the Probe, again added his action theme
--cut Steve kissing Irena..... Jaime is his one and only!!! lol
--lots of trims during Eagle Dam final battle, again added new music
--I actually kept the commercial breaks in this one because the story structure is a bit of a mess, and I think plays stronger with the dramatic cut to blacks
Cover art by bionicbob (DOWNLOAD HERE) 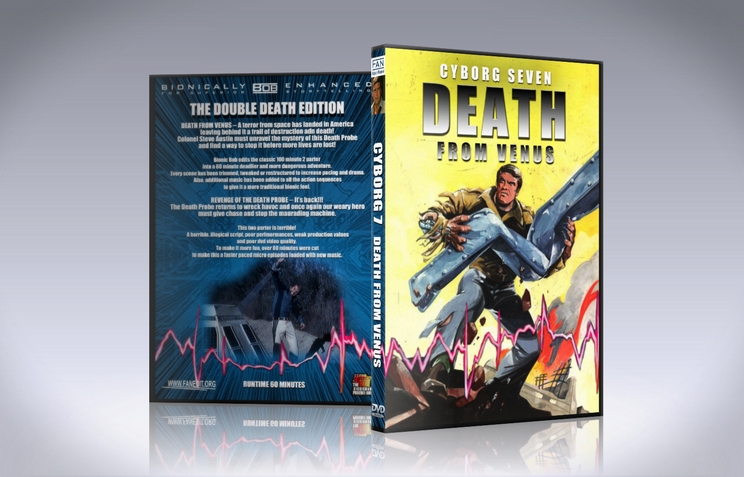