Updated August 17, 2020
9.8 (5)
1883 0 1 0 4
Compare
Write Review Add to favorites Add to list
Faneditor Name:
Tagline:
"There are over 400 billion stars in our galaxy alone ... It is inconceivable and arrogant
to even consider that ours would be the only one hosting intelligent life, in all the universe."
- Carl Sagan
Original Movie Title:
Genre:
Fanedit Type:
FanFix
Original Release Date:
1997
Original Running Time:
149
Fanedit Release Date:
April 2019
Fanedit Running Time:
134
Time Cut:
15
Available in HD?
Yes
Additional Links:

Brief Synopsis:
We explore one possible road to mankind's first encounter with extraterrestial life. Curiosity and the scientific method clash with fear, religion, and greed. Along the way everyone's beliefs are tested. The film is a tribute to Carl Sagan who spent his life popularizing scientific inquiry, who tirelessly championed the search for extraterrestial life, and who stimulated the awe and sense of wonder in all of us. The edit is about Dr. Arroway's personal journey more than mankind's journey. Her perseverance against the odds and despite resistance. Palmer Joss, the alien, and Mr. Kitz are less frustrating, and the last quarter of the film is greatly improved. As epilogue Dr. Sagan himself talks about Contact, science, and religion (audio excerpt from 1985 Studs Terkel interview).
Intention:
I really wanted to love Contact when it came out. It had so many ingredients going for it. Carl Sagan was an inspirational educator. Who doesn't remember Cosmos? (If you don't: Go. Watch it now!). Robert Zemeckis has made great films. Jodie Foster too. I'm a fan of science fiction that keeps the science credible. I remember being disappointed that Sagan's novel was made into a good-but-not-great movie in 1997. What held it back was the preachy Hollywood-drama, and the way the film dragged in the final act. That is now redeemed! This edit reinvigorates our want for the scientific method and the search for extraterrestial life!

Ellie's mom is no longer mentioned. Too many Hollywood movies have the mom die at the start of the story, just to make the protagonist's life harder. It's become a lazy plot device. All references to mom are cut (Ellie to dad, Ellie to Palmer, Hadden to Ellie). This also removes the jarring omission of who raised Ellie after her dad died. Did she live in that big house alone from nine until college?! How could we possibly be expected to believe that Ellie is ignored after her dad's funeral if mom isn't there to be the focus of everyone's attention instead? (Likely answer: in Sagan's book the mom doesn't die, so they added the death but didn't think it through).

The alien is trimmed. He (it?) doesn't pretend to be dad. The exchange is more matter of fact.

Kitz, the government-knows-best man, is trimmed during the Senate hearing. His attack is toned down, making him less of a Hollywood caricature.

Hadden, the industrialist, is trimmed. Sadly, because I like Hurt's performance! His exposition of Ellie's childhood is trimmed. The extra information doesn't further the film, and it removes the question of how (and why?) Hadden got that family video. His death scene is cut. We already knew Hadden was terminally ill, seeing his death didn't further the plot. Kitz no longer mentions Hadden at the Senate, so the cutaway didn't make sense anymore.

The suicide pill is cut. The idea has been debunked by enough qualified people, including astronaut Lovell and several NASA directors, to not believe that astronauts were given these. It wasn't relevant to the further story (Ellie doesn't use or contemplate using it), and frankly I found the actor who presents the pill frustrating. His performance reminded me of Carl Sagan's style and delivery, not as an homage but as an unsuccessful "I want to be like".

Multiple trims for pacing. The test in Florida. The preparation for Ellie's launch. Fewer shots of her walking the gantry and strapping in. Less hesitation from the controller. Ellie's wormhole journey, and on the beach.

The film now ends on the cliffhanger of Kitz and Constantine talking about the 18 hours of static. Partial cliffhanger: we still get the reveal of the static but we no longer see Ellie go back to the same life as if nothing happened, nothing changed. That was a huge downer. To add insult to injury, when a schoolkid asked this now world-famous maybe-space traveller whether life exists out there, she DUCKED the question. Argh! Instead, the scene with the school kids is moved to before she discovers the signal (with corrected time card).

Several moments are trimmed where the filmmakers hit us over the head with obvious or annoying lines. Gone are "Does anybody speak German?", "Where can I buy a great dress?", one close-up of the religious terrorist.

One special effect is cut: Ellie's face coming out of her face during the wormhole journey. Yeah, that sounds weird but it's what they did. Anyway, the effect wasn't great and isn't needed for the story. 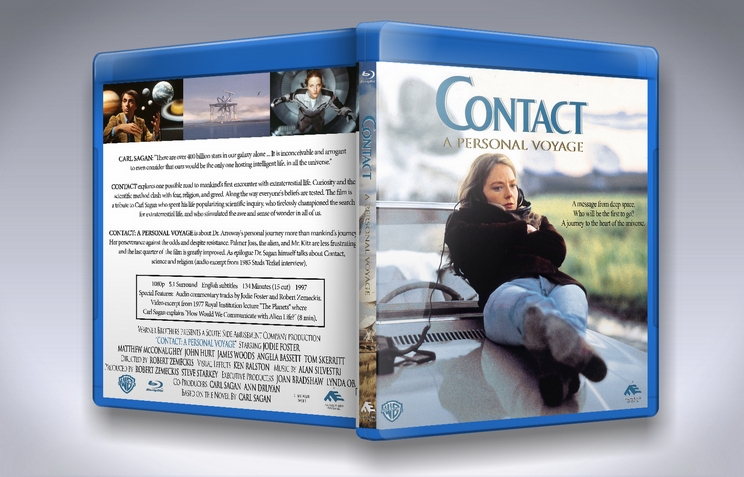 5 reviews
Overall rating
9.8
Audio/Video Quality
10.0(5)
Visual Editing
9.4(5)
Audio Editing
9.6(5)
Narrative
9.6(5)
Enjoyment
10.0(5)
Already have an account? Log in now or Create an account
August 17, 2020
Overall rating
9.9
Audio/Video Quality
10.0
Visual Editing
9.0
Audio Editing
10.0
Narrative
10.0
Enjoyment
10.0
A significant improvement of an already wonderful film. Highly recommended!
I love the Theatrical Cut, despite its flaws, but this edit is far superior. The trims, though mostly unnoticeable, greatly improve the pacing and get rid of weaker elements in the plot. Gone are cheesy moments and some tropes, such as the dead mother that does not contribute anything to the plot.
There were two trims I found slightly jarring - at 1:10:19 and at the very end. Upon further inspection, the first was a bit jarring even in the TC, and the other was because of good reasons (moving the epilogue to a more reasonable time slot).
Bottom line - this edit is beautifully edited, and my new go-to version of the film.

Do you recommend this edit?
Yes
Format Watched?
Digital
B
boazz750 Top 50 Reviewer 50 reviews
Report this review Comments (0) | Was this review helpful? 0 0
July 27, 2020
Overall rating
9.7
Audio/Video Quality
10.0
Visual Editing
9.0
Audio Editing
10.0
Narrative
9.0
Enjoyment
10.0
I really enjoyed this edit. I am a fan of Carl Sagan and the novel Contact. Like lapis molari, I enjoyed but didn't love the original film. This edit is a nice improvement. The pacing is good, I agree with everything that was removed, and moving the bizarre ending scene really helped. Unfortunately the ending in this edit seems very abrupt, although I don't have any idea of how that could be improved. The only other minor quibble is a jarring edit in the scene in Ellie's quarters in Hokkaido before her journey - it was jarring enough that I think the scene could have been cut altogether.

I really appreciate the extra video clip that was included and the audio interview at the end. Excellent stuff.

Thanks lapis molari for your great work and giving me reason to experience this story again!

Do you recommend this edit?
Yes
Format Watched?
Digital
C
cvetocek6 Top 1000 Reviewer 1 reviews
Report this review Comments (0) | Was this review helpful? 0 0
January 03, 2020
Overall rating
9.7
Audio/Video Quality
10.0
Visual Editing
9.0
Audio Editing
10.0
Narrative
9.0
Enjoyment
10.0
This is a great edit of the film I particularly like the pacing improvements and moving the final scene earlier in the movie so that it doesn't undermine Ellie's voyage (in the original she basically acts like nothing ever happened). My only minor criticism was that in a couple of the edits you can tell that a bit has been cut as the actors have changed position too quickly (but that is inevitable with the source material). The relationship between Palmer and Ellie is improved with this edit and I like the fact that the problem of who looked after Ellie after her dad died is resolved (or at least no longer stands out as a question). Technically I can't fault the edits that were made (many of which I only spotted because I know the original so well). I would definitely recommend this edit as an improvement on the original.