Brief Synopsis:
This edit mixes the original 1982 Blade Runner with 2017's Blade Runner 2049, making one compelling movie (within a reasonable running time). The focus of the film is about replicant's ability to love and have children / create life. The film cuts between Deckard's investigations and Officer K's. Footage from the original Blade Runner will be presented in black and white, to differentiate between past and future scenes.
Intention:
I noticed that no one had tackled merging these two films (as of yet), despite them having very similar themes. This felt like a challenge worth taking on and a chance to create a truly unique fanmix.
Other Sources:
- Blade Runner 2049: No where to Run
- Blade Runner Theatrical Cut
Special Thanks:
To my brother for his opinions during the editing process and credit and thanks to jswert123456 for making the cover art.
Release Information:
Digital
Cuts and Additions:
[ SPOILERS AHEAD ]

- Brand new opening titles.
- Movie begins with K and Deckard talking in Las Vegas.
- Tweaked establishing shots of Los Angeles (30 years ago).
- Brand new title cards.
- Changed the order in which Bryant introduces the four replicants, so that Batty is announced last.
- Removed any references to incept dates.
- Added "Nowhere to Run" short to establish Sapper Morton (30 years later).
- Cut some of the scenery shots of K flying over the farms.
- Cut some of the dialogue, including a reference to how long Sapper had been on the farm.
- Cut all reference and attempts from K to scan Sapper's eyeball (had to cut Sapper stabbing K as a result). This is to preserve the importance of the Voight-Kamff Test which is shortly introduced to the film.
- Cut Joshi's dialogue referencing finding the rest of Sapper's unit.
- Removed any shots that showed Sapper's eyeball in a bag.
- Shortened the flying to Tyrell building sequence.
- Merged the end of K's baseline test with the start of Rachael's VK test.
- Transitioned from the end of Rachael's VK test to K going to Tyrell archives to find footage of said VK test.
- Removed any references from the receptionist regarding the blackout.
- Retained Luv briefly as a Tyrell assistant who shows K the Rachael/Deckard footage.
- Removed Luv's references to Wallace, the blackout and replicants being "difficult to spot back then" (very tricky, lots of clever audio cuts involved).
- Changed it so Deckard finds Zhora's photo amongst Leon's photos (removed the photo scanning sequence later on)
- Transitioned from Gaff's stickman origami shot to old Gaff making the paper bull in the retirement home.
- Batty's introduction, removed the Chew interrogation scene entirely. As Leon managed to get a job at Tyrell corp, it Seemed logical enough that they would know who JF Sebastian was without the need for Chew telling them.
- Cut Deckard going through Leon's photos / standing on the balcony.
- Mixed Deckard's dream at the piano with K finding the child's sock in the piano.
- Cut K finding Freysa's photo in the piano. He only finds the sock.
- K's flashback to the horse figure presented in black and white. Added a brief flash of the date inscription on the bottom of the horse.
- Removed Joshi looking at the photo of the date on the tree. Seems odd that K would bring a photo of that to her attention, as it links him to the investigation.
- K's scene explaining the memory of the horse tightened up.
- Removed Joshi's "what happens if i finish that?" line.
- Cut Joi out of the DNA records scene (seems K likes talking to himself now!).
- Cut some sea wall shots.
- Cut Joi out of the flying to the orphange scene.
- Cut K being attacked by scrappers / Luv dropping the bombs.
- Sped up K striking Mister Cotton.
- Cut down the walking round the orphange / furnace scenes.
- Added quick flashbacks to K's memories of the orphanage / horse.
- Recut the horse finding scene to not make K look as emotional (trying to move away from the idea that K thinks he's the child).
- Cut down the delivery time of the "I'm not in the business" line.
- Removed "I owe you one" from the "would you come for me?" line.
- Added a subtitle for Stelline Labs (as Joi's"who makes the memories" line is now gone).
- Added "one more kiss dear" track from original movie to the birthday memory creation scene.
- Removed line about memory implantation being illegal.
- Removed any reference to Wallace in the memory making scene.
- Added 2 brief flashbacks to the orphanage scene to help the Anna reveal later make more sense. Also cut shots of K appearing too emotional (shouting God damn it, etc). Anna brings the emotion here, and a hunch that K suspects her to be the child.
- Cut K being arrested: scene transitions to Deckard on the balcony.
- Cut K / Joi sex scene.
- Removed JR's "no housing shortage" line.
- Merged the scenes where Pris and Batty meet JR into one.
- Removed wallace reference / Joi from Dr. Badger scene.
- Cut the bee sequences.
- Added the Bradbury Apts music to the Vegas scene, to help the two scenes transition together better.
- Cut down the treasure island reference ("toasted mainly").
- Batty hunting Deckard / Deckard hunting K scenes dynamically cut into each other.
- Removed any times Batty calls Deckard by name (seems unlikely he would know his name?)
- Deckard and K conversation paced differently.
- Removed K calling himself Joe.
- Added a new "reveal" scene. Implied that Sapper was Deckard's ally "everyone had a part". K / the viewer figures out who Anna is by linking the wooden figures to his horse and by examining the photograph of Rachael.
- Changed it so it's a police drone that tracks K down, not Wallace's goons.
- K and Deckard flee and head to Anna's lab.
- Removed Deckard asking if K is okay.
- Added a door closing sound to imply Deckard has gone safely inside the lab.
- K is arrested by the police, using a clip from earlier in the film.
- K has a baseline test that is way off.
- K lies to Madame Johsi - tells her that he has destroyed the child and that "it is done", explaining his bad baseline and thus covering his own tracks.
- Film ends with Deckard placing his hand on the glass.
Cover art by jswert123456 (DOWNLOAD HERE) 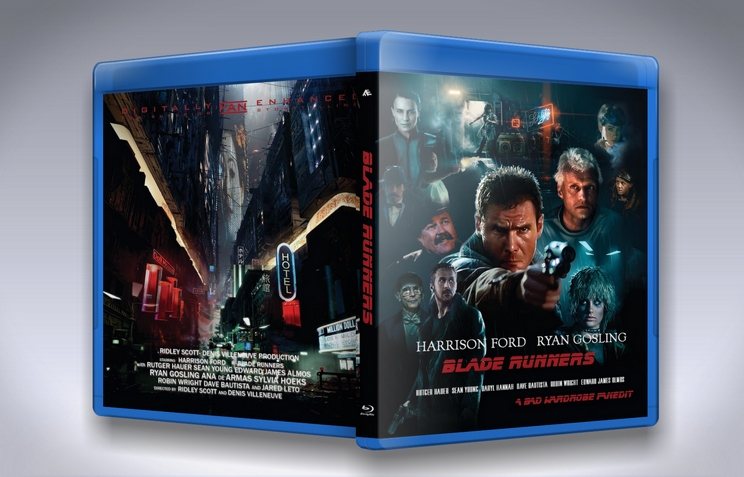