Brief Synopsis:
Blade RUnner exusts in 5 versions The Theatrical Cut (117min), The International Version (117 min and a bit), The Director's Cut (116 min), The Final Cut (117 min) and The WorkPrint (113 min). This version tries to do two main things:
- include every frame from the Theatrical Cut, International Version, Directors Cut and Final cut
- add a handful of additional VO lines, correcting them for pitch and pace so they sound like Deckard
Intention:
To creat a Voiceover version using every frame from the four main versions and some additional Workprint shots and 2 mins of additional voiceover lines culled from 45 mins of available material.
Other Sources:
Blade Runner limited edition Score CD
Blade Runner Re-recorded Score CD
Blade Runner motion GIF
Special Thanks:
TM2YC, who made the ultimate edit (The Penultimate Cut) and said " the more the merrier" when I suggested not releasing this. THANKS!
Release Information:
Digital
Editing Details:
The base for this edit is the FINAL CUT grade, but where material is used from other version, I have placed a tiny marker in the lower right (in the black area) which if NOT the Final Cut, tells you where the material is from . DC= Dir Cut, IV, International Version, WP = workprint....yes there are a few tiny segments in there, but NOT the hospital visit.

Much like my CE3K Edit, I wanted it all which also means there is now a unique unicorn sequence with some telling added VO - nuff said.

This sounds like a light edit, but the longest unbroken Final Cut section runs 19 minutes and there are over 100 meanderings in and out of differing versions to get EVERY OFFICAL FRAME. As an example, ina 2 min stretch as the camera pans down on Deckard at the Sushi bar, the edit goes into the WP for a line of dialogue, then DC, IV, DC, Xtra VO, FC, Xtra VO, FC, TC, FC, IV and finally back to FC. coz the shots vary in length, and , fo inatance, close up n the sushi plate. This however is NOT not padded out with workprint material. Just a couple of shots. les than 30 secs overall. The blue hue from the Theatrical cut in the Ice lab and a few other scenes has been retained as well.

SO,,I hear you ask, what are the extra lines?

Trust me, they are VERY carefully selected. If you want all the VO, watch the workprint...this ain't it. This is my perfect-dream version of Blade Runner . I no longer have to shout "I saw his thumbs go in, I'm sure it was like that", and "where did the VO go"....and "that's a different unicorn". Well , I've managed to retain all the shots of the horned beast with a little surprise too. Much like The Godfather, it turned out to be a far harder edit to pull off that I anticipated, but I've sat on it for near on 3 years, so here ya go. I even rendered it without any VO, just in case I one day get pissed off with it, but VO is the one submitted.

Cuts and Additions:
- included every frame from the Theatrical Cut, International Version, Directors Cut and Final cut
- add a handful of additional VO lines, correcting them for pitch and pace so they sound like Deckard
- Plus a unique Unicorn sequence
- preserved the blue hue for a few scenes

A handful of extra lines (2 mins in total) from over 45 mins of available VO; only relevant lines to the plot points of existing dialogue or character ere chose. Then I had to slow them down since they tended to be delivered quickly. Then pitch correct them coz they were spoken in differing tones of voice, thus making it consistent.

How much time gets added with EVERY FRAME versions? 5 mins. RT 121.5 mins
Cover art by Wraith (DOWNLOAD HERE) 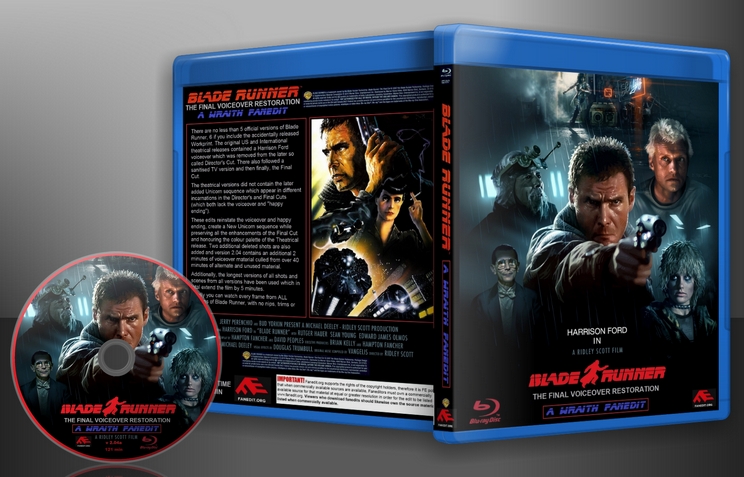 Do you recommend this edit?
Yes
Format Watched?
Digital
T
thewatchers Top 1000 Reviewer 1 reviews
Report this review Comments (0) | Was this review helpful? 1 0
February 03, 2022 (Updated: February 03, 2022)
Overall rating
9.2
Audio/Video Quality
9.0
Visual Editing
8.0
Audio Editing
10.0
Narrative
10.0
Enjoyment
9.0
I've always been a fan of the original Blade Runner VO, as it makes the film feel like a sci-fi cyberpunk detective noir in the spirit of Sam Spade and hardboiled crime fiction of the past. If you're like me or even if you're just curious, this edit is definitely worth a viewing. It was honestly shocking to learn that some Deckard VO lines had been tweaked (e.g. to correct pitch), because as far as I could tell, they all sound flawless and seamless. As others have said, while the VO is very tonally different from the feel of the Final Cut and Blade Runner 2049, it *does* actually add to both films by A) clarifying certain events in the movie and illuminating Deckard's thought process, and B) setting up a solid narrative transition into the events of Blade Runner 2049.

Amazingly, this edit also includes every frame from the different major releases of the film. This is a truly impressive feat, and fans will find a lot to like here. The scenes have been cut together very nicely so that action flows seamlessly, and there isn't the slightest hint of an edit in the soundtrack. It's a truly impressive feat.

Unfortunately, I couldn't give the visual editing a perfect score because there are problems. Some of the scenes have text stamped at the bottom out of frame, indicating that you're watching a specific version of the film. This can be jarring at times. There are also very noticeable changes in visual quality, and again, it can be stark and jarring as the visuals switch from one version to another. Short of an effort to upscale or color-correct every segment, it's hard to know what could be done, so I don't much fault the editor.

That said, a quality edit and well worth your time if you're a fan of the VO or just want to give it a try.

Do you recommend this edit?
Yes
Format Watched?
Digital
T
taurus Top 500 Reviewer 10 reviews
Report this review Comments (0) | Was this review helpful? 1 0
January 10, 2022
Overall rating
10.0
Audio/Video Quality
10.0
Visual Editing
10.0
Audio Editing
10.0
Narrative
10.0
Enjoyment
10.0
Yep, a perfect 10 from me. I have loved this movie for a long time, and enjoy watching the various iterations of it. Wraith's edit is now part of my go-to selection.
All the insertions from the various versions as seamless, so I can't tell what bit came from what version (and I didn't notice source notation--I was just enjoying watching too much). The audio is well done, particularly the updated voiceover. The added bits helps smooth that aspect immensely; there's now enough to get a proper narrator retelling the story and adding extra insights effect rather that the feeling of assuming you as the audience is not sophisticated enough to get what's going on.
I missed the hospital visit scene, but that's not enough to knock any stars off. I always waffle between liking and not liking the happy ending, but as mentioned with the additional voice over it helps transition to the new movie.
Great edit and I'm glad it got released for us to enjoy.

I’m so pleased you enjoyed this and thank-you for your review.

R
racerx1969 Top 100 Reviewer 32 reviews
Report this review Comments (0) | Was this review helpful? 1 0
January 06, 2022
Overall rating
10.0
Audio/Video Quality
10.0
Visual Editing
10.0
Audio Editing
10.0
Narrative
10.0
Enjoyment
10.0
Another stunning labour of love from Wraith. I mentioned that as a guilty pleasure I actually really like the VO version! In my humble, I think it gives it a real film noir detective feel which I think as a viewer adds another personal and human voice to his thoughts and actions. This adds even more depth to the mythology of Blade Runner. Yet again the quality is up there with my UHD disc of the Final Cut but I really think for sheer enjoyment this surpasses it! Thanks again to W for another fantastic alternative vidi experience!