Additional Comment: This is my first fanedit attempt and I think it turned out pretty well, but certain parts of it I was in a little over my head. I managed to smooth MOST of the video/audio glitches or inconsistencies, but there a few rough spots that, with the way the surround sound was mixed, I just couldn’t find a way around.
Cuts and Additions:
*Opening time title cards cut. Avoids dating the film, it has more of a life of its own.

*Frost’s “Like it matters” dialogue cut. He’s more menacing if he’s not a brat about the discrimination of Pureblood or Turned.

*Entire Essence of Garlic herb seller scene removed. Provides information we learn elsewhere and is not relevant to the rest of the story.

*Frost/Dragonetti’s archive homoeroticism re-edited. This is now where Frost decided to extract Dragonetti’s fangs later on instead of having a weird homoerotic moment.

*Karen no longer checks the phone in her apartment. She’s no dummy, she’s hauling ass out of town after the hallway scare.

*Karen no longer says “Is all that really necessary?” in Krieger’s beating. If she’s hauling ass out of town forever, she’s smart enough not to care if Blade breaks the table.

*Frost examining the complete translation moved to directly after Krieger escapes in public. This was the only relevant material of the vampire party scene–the rest is cut due to irrelevant indulgence.

*Blade’s “like me,” line cut. He knows he’s a badass but has no need or interest in publicly expressing it. The sword twirl says it all.

*Intro to vampire safehouse trimmed. Way too long in the original film.

*Pearl scene comprehensively re-edited. Neither Blade nor Karen now allow for any screwing around and don’t hesitate to use the UV lamp.

*Whisler’s “Give me a goddamn wheelchair” cut. Totally out of character for Whistler and inappropriate timing.

*Frost’s “I ain’t gonna bite you,” cut. He’s a bit more vicious if he just kicks him.

*Frost’s “I see such a beautiful women…” cut. He’s a vampire, so his seemingly sexual attraction to a human is a bit weird. He remains quirkily courteously base.

*Frost’s “Everyone you’ve ever known… everyone you ever f*cking loved” cut. Too much cursing, too much loss of composure.

*Frost/Quinn "You want him alive?" "Shut the f*ck up!" exchange cut. Amusing, but unnecessarily distracts from the moment and provides no character we don't already have.

*Flashback of Whistler cut before “I just work for them!” Blade is pissed and we already know why. It’s plays better if he has zero hesitation.

*Blade capture sequence comprehensively re-edited. Frost’s dialogue is both re-sequenced and moved. Much shorter, more to the point, less bratty behavior and cursing.

*Frost’s “Let’s see this sword of yours” sequence is cut entirely. Moves straight to serum. (Sure, we see him handle a sword for the duel later–but come on, he’s a Blood GOD later so handling a sword should be no sweat, right? And where does he GET that sword, anyway?!)

*Frost’s “You should’ve listened to your blood” speech trimmed for excess.

*Quinn’s laugh present but trimmed. Too clownish with the first half of it intact.

*Mother’s “Sooner or later the thirst always wins” cut. Yeah… we get it… and that’s not the point of their exchange anyway.

*Quinn/Frost’s “Naughty vampire Gods” exchange removed. Quinn the clown again, and Frost’s duplicity hinted at but which we already know about.

*Racquel’s “Pureblood spirit” speech removed. Now after the two Purebloods try and reason with her she just kills the extra Pureblood accountant.

*Lightning striking the Daywalker holding box in temple cut. If Blade isn’t in it anymore, shouldn’t that screw everything up? Removed for continuity reasons.

*Frost’s post-Godification grunts and “Not anymore,” cut. Why does a God need to grunt or make a cheesy “Exorcist” homage?

*Quinn’s “Two new hands to kill with” cut. He charges in and is now decapited. Why give Blade more opportunity to prepare?

*All “FROST!” shouts during Henchmen battle are cut.

*Frost’s “Hey Blade…. let’s do this” cut. Silly way to start a duel. The sword twirl remains to communicate the sentiment more effectively.

*Frost’s dialogue and bratty behavior in remainder of duel cut. There’s no menace if he keeps shooting his mouth off.

*Blade on his back nearly seamlessly joined (to accomodate the previous cut), serum location shot reversed to end Close Up on serum.

*Serum throws re-edited and re-foley’d. Frost no longer jumps about and the serum throws no longer ring like a cash register nor does Blade scream the whole time. 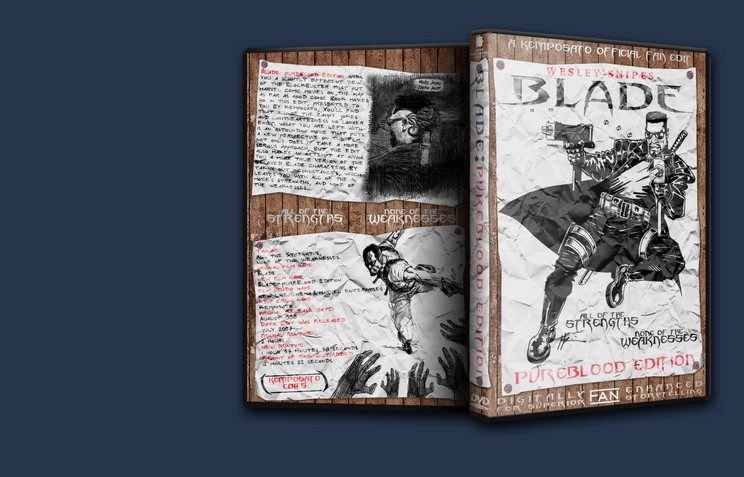 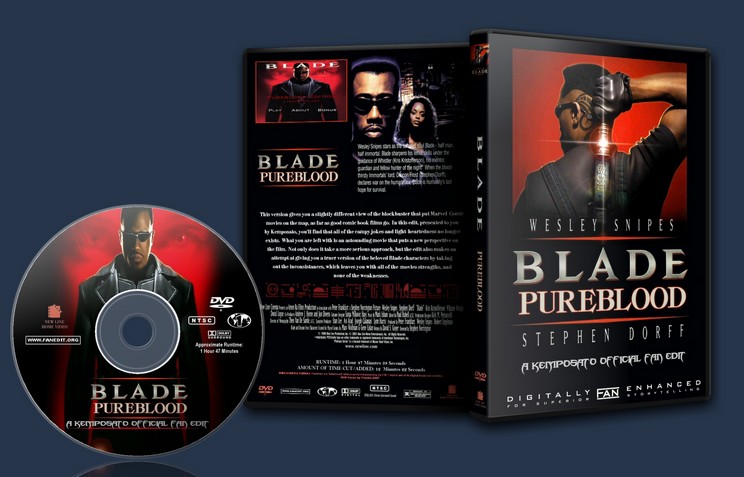