Brief Synopsis:
This DVD contains a series of ten short FanEdits that explore the Batman Universe. Each short FanEdit has been created by a different FanEditor using the many Batman sources available, animation, TV series and motion pictures.
Intention:
This is a unique project, which started on the forums from an idea by faneditor Mollo to bring together the creative powers of some of the best faneditors in the world for a DVD featuring short fanedits from the Batman universe. The call was received with excitement and only a month later the final DVD saw the light of day, including some wonderful works of art. All of the included fanedits differ a lot from each other, so there should be something on it for all kinds of Batman fan tastes.
Additional Notes:
- Depths Of Darkness by Infodroid (10:55)
Using footage from several Christian Bale movies and music from The Dark Knight, this story paints a grisly portrait of the psychological effect of guilt.

- Mayhem & Mistletoe by ThrowgnCpr (5:56)
Inspired by the “Hush” comic series for Batman, this is about when Batman first encounters Catwoman. Here we find that maybe Batman isn’t perfect, and that women always rule over our minds and our hearts.

- Intruder Alert! by Dluppers (10:49)
When Barbara decides to visit her uncle Alfred at the Wayne manner,her life is changed forever.

- The Savings Never End! by Grievous Angel (8:36)
The worst film in the series going back to its roots! An infomercial, with an annoyed voice over guy and a guest appearance by everybody’s favorite overlord.

- The Case Of The Chemical Syndicate! by Jokersmailbag (11:45)
A taste of what might have been if the powers that be had opted to bring the Caped Crusader back to TV rather than the movies in the late 80s. This particular “episode” focuses on the Joker’s origin.

- The Killing Joke by Jack Tourette (10:46)
Based off the hit graphic novel ‘The Killing Joke’, this tells the story the tragic story of Barbara Gordon’s transition from Batgirl to Oracle.

- The Gordon Perspective by Uncanny Antman (9:52)
James Gordon: One of Gotham’s finest. How can he trust this “Batman” he knows so little about?

- Bat Memento by CBB (11.27)
A time travel from Raz Al Gul to the source of fear – Memento style in respect of Chris Nolan’s genius.

- Inner Turmoil by Kolpitz (8:30)
The live-action and animated worlds of Batman collide, as the Caped Crusader struggles to find his true identity within himself after being poisoned by Scarecrow’s fear toxin.

- Pussy Control by Mollo (10:19)
Batman faces Catwoman for the first time and finds that he is captivated by her feline beauty. Catwoman exploits her power over Batman and proves that pussy is in total control! 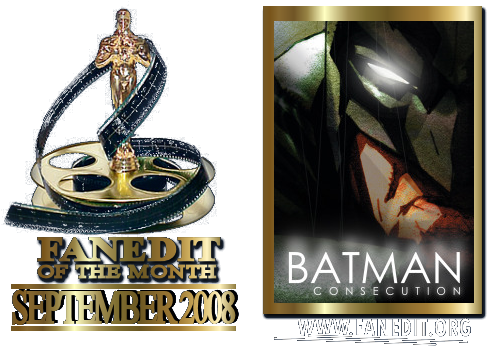 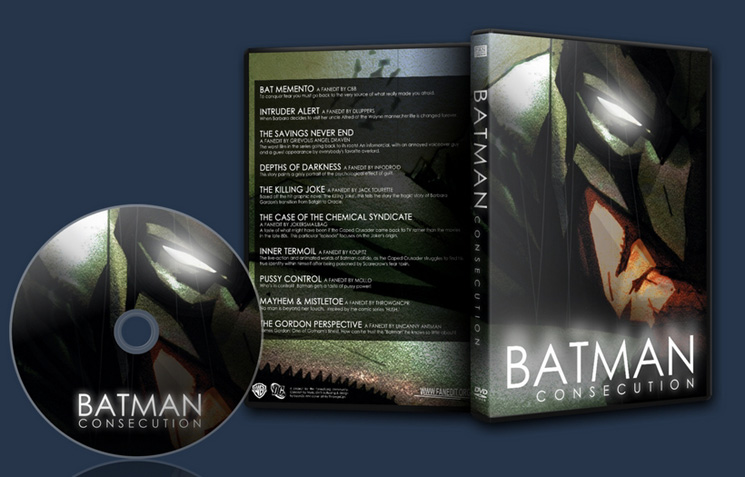 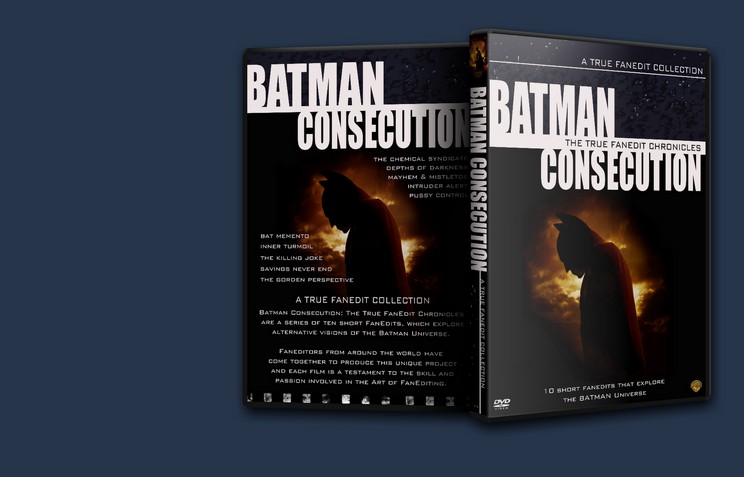 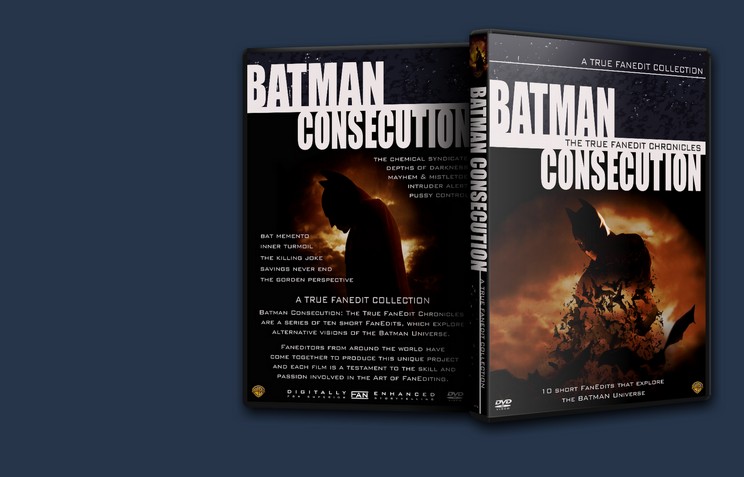 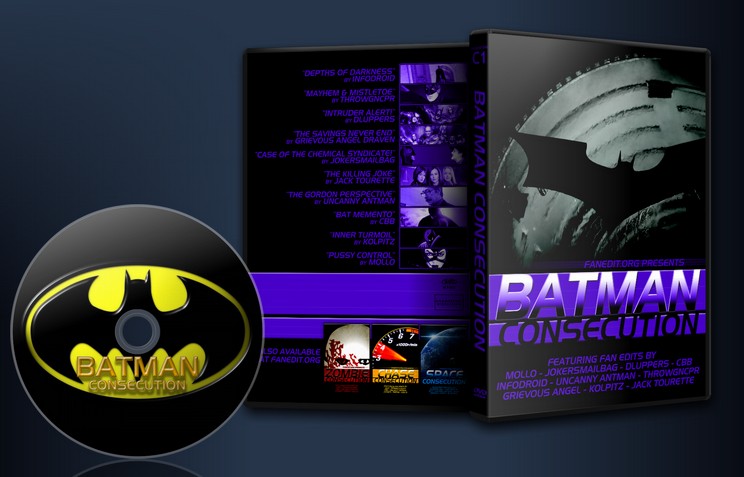 I agree with sladetwc. I really enjoyed the whole thing, except the info-mercial. When it began I was thinking, “Besides the speaker talking too loud (on purpose, but still) into the mic, I know this will be good.” But slowly it just got cornier and cornier. I’m not sure the concept was fully fleshed out. Even with a bad film like Batman & Robin, something watchable could be made from it (like the first short I surprisingly enjoyed). But Grievous Angel just went a bit too far.

Anyway, onto the praise. EVERYTHING about this comp otherwise I really enjoyed. The splicing between animation & live-action for the Scarecrow could’ve been handled a bit neater, but that still ended up really good. My personal favorite of all the shorts is absolutely Depths of Darkness. Brilliant how he meshed so many different films to tell a cohesive tale. I feel like watching that again right now.
N
nuntype Top 1000 Reviewer 2 reviews
Report this review Comments (0) | Was this review helpful? 0 0
September 19, 2012 (Updated: September 19, 2012)
Enjoyment
9.0
May 18, 2012

Depth of Darkness – Arguably the best of the bunch, this was a fanediting work of art! 10/10
The Case of the Chemical Syndicate – Absolutely stunning. You nailed the feel and style of an old T.V. show. Perfect! 10/10
Mayhem and Mistletoe – Terrfic! I loved the visuals! 9/10
Intruder Alert – Ugh. Good editing but the material you had to work with sucks. 5/10
The Gordon Perpective – Not bad. 7/10
The Killing Joke – I didn’t like this one bit. Altough it had good editing, the video quality is subpar and I hate that T.V. show. Not really your fault though. 2/10
The Savings Never End! – Epic fail. I could not understand one word you said, and I was bored to tears. 1/10
Bat Memento – Good editing. 8/10
Pussy Control – Good, but since we see this exact scene twice I was rather bored. 6/10
Inner Turmoil – I didn;t really connect with this one. Sorry man. 5/10

Depths of Darkness – This to me made the whole download worth while. The only thing i would of like to see was more clips from the batman movies used and less clips from Equilibrium.

Chemical Syndicate – Wasn’t to impressed here, seemed to me that not much thought/time went into this edit. (but still an easy watch)

Intruder Alert! – I didn’t really under stand what the editor was going for with this, was just some bad parts from a horrible movie. (also why is everyone so cool with her being bat girl? it was just like oh here’s your costume go fight crime)

Mayhem and Mistletoe – The Sin City approach was okay, but still don’t think much was done with this edit. (didn’t thrill me at all)

Bat Memento – Actually thought this was pretty cool edit, would of liked to see some lines of narration in though (like they do in Memento).

Inner Turmoil – I personally didn’t like this, though i did like the idea. It just didn’t work for me sorry.

Savings Never End – …wow, what was that? I mean really…was this supposed to be funny? I think i got like 5 mins in and then just started skipping ahead to see if it got any better…which it did not. Maybe if the voice over was funny this could have worked, but it was not. Even then should not have been longer than a few mins.
(PS those 5 mins felt like hours)

Pussy Control – I thought some parts were funny, but over all it fell a little short to me.

Gordon Perspective – This (like the joker one) was a little to simple for me, and almost felt like a cop-out (just take all the clips involving one character and string them together).

Killing Joke – I had never seen Birds of Prey before, so this to me felt new for that reason alone. I was still not impressed with anything here…sorry.

overall i felt like more time should have been spent ahead of time to come up with some really cool ideas, personally the majority of the shorts felt quickly thrown together. apart from DoD they didn’t really tell any new story to me, which i thought was the point…because otherwise…why do this at all.
V
videohead Top 500 Reviewer 22 reviews
Report this review Comments (0) | Was this review helpful? 0 0
September 19, 2012 (Updated: September 19, 2012)
Enjoyment
6.0
May 4, 2010

Though I appreciate the amount of work that went into it, it just wasn’t my thing, really. I found it very hit and miss, and even the hits didn’t really draw me in a whole lot. There were some cool ideas, some that felt a little “meh” to me, and some that just didn’t really go anywhere or fell flat. As I said, though, I appreciate the efforts (all of them!) and will give this compilation 6[.5]/10.
R
ripplin Top 50 Reviewer 102 reviews
Report this review Comments (0) | Was this review helpful? 0 0
View all user reviews