Brief Synopsis:
The Babylon 5 Project aims to focus on the arc stories of the TV show by creating a series of films. This creates a more streamlined rewatch of Babylon 5 for those who want to maximize the arc without having to watch the mostly stand-alone episodes with arc storylines in them.
Intention:
Babylon 5 has such a riveting arc based story that I've returned to watch time and time again but I'm not a big fan of the standalone episodes. However, many standalones do have some arc based storylines which are paid off later. I wanted to craft a new way to watch the series which creates an "all killer, no filler" B5 experience. Some films would just be three or so episodes strung together because of how heavily arc concentrated they are. Other films need to be built from the ground up from the pieces of many episodes which creates new viewing experiences and slightly changed narratives. The Babylon 5 Project also looks to exorcise some loose plot threads that don't pay off down the line.
Release Information:
Digital
Editing Details:
This film is mostly built from the episodes "Voices of Authority" and "Dust to Dust". Some other storylines have been taken from the four other adjacent episodes which have some bearing on the overall plot. In some cases, they're just single scenes. Here's a run down:

"Convictions": The arrival of religious pilgrims and Brother Theo and his monks.

"A Day in the Strife": The bulk of the added scenes comes from this episode. The A story of the berserker probe has been removed entirely but the G'Kar storyline and Dr. Franklin's stims storyline are left intact.

"Passing Through Gethsemane”: Despite being a favorite episode of mine, most of this has been exorcised out. Only Lyta returning to Babylon 5 was used.

"Exogenesis": I only used a single scene as setup for the next movie. Marcus sits in a seedy bar and his contact mentions "the package" is on its way from Mars.
Cover art by subjectzero (DOWNLOAD HERE) 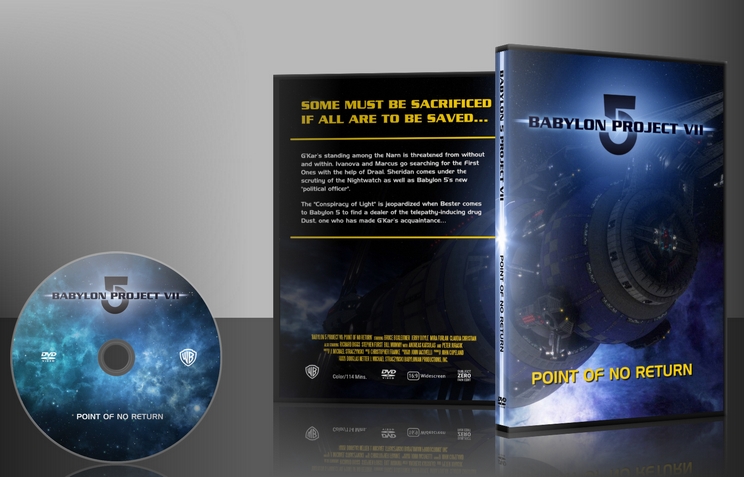