Brief Synopsis:
The Babylon 5 Project aims to focus on the arc stories of the TV show by creating a series of films. This creates a more streamlined rewatch of Babylon 5 for those who want to maximize the arc without having to watch the mostly stand-alone episodes with arc storylines in them.
Intention:
Babylon 5 has such a riveting arc based story that I've returned to watch time and time again but I'm not a big fan of the standalone episodes. However, many standalones do have some arc based storylines which are paid off later. I wanted to craft a new way to watch the series which creates an "all killer, no filler" B5 experience. Some films would just be three or so episodes strung together because of how heavily arc concentrated they are. Other films need to be built from the ground up from the pieces of many episodes which creates new viewing experiences and slightly changed narratives. The Babylon 5 Project also looks to exorcise some loose plot threads that don't pay off down the line.
Release Information:
Digital
Editing Details:
The backbone of this edit was Signs & Portents along with A Voice in the Wilderness (parts 1 and 2). The only major revisions I've made to those stories is the removal of the prophecy that Babylon 5 is doomed to be destroyed, leaving it a bit more vague. Also added the G'Quan-Eth plant subplot from By Any Means Necessary which introduces the religious side of G'Kar which is a big part of his character. Catherine Sakai makes her only appearance in the film series in this episode and has no relationship to Sinclair from the Sigma 957 subplot from Mind War. Mostly, this film is all the real setup for the coming Shadow War.

At this point, the only remaining episode from season one is the season finale. So after watching both of these movies, you can watch that and get into the series proper with Chrysalis and continue from there.
Cover art by subjectzero (DOWNLOAD HERE) 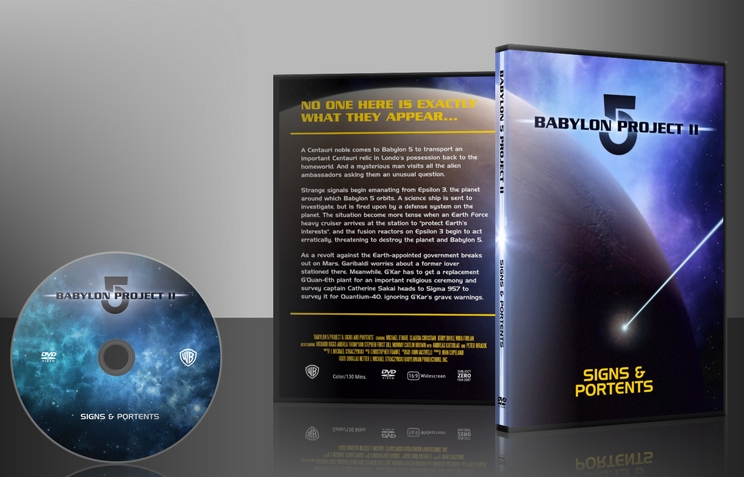