Brief Synopsis:
The first half of BABYLON 5’s season 5 is dominated by the telepath story arc Phoenix Rising, where Lyta develops from a direction-less character on the periphery to a focused
key character. It's more enjoyable by making Byron less pretentious and a little less prominent. He is a catalyst for Lyta rather than a driving force in his own right. Other storylines in these episodes are unchanged.

Intention:
Goal: Make the first half of Season 5 more enjoyable by improving Byron and his group of telepaths. Make it clearer that Lyta, not Byron, is the titular Phoenix.

How: Cut, trim, and dub Byron where he is most erudite / everybody owes us / I want to be a main cast member but my character isn't fleshed out enough. Reveal Byron, while still flawed, as more serious and well-intentioned. The story flows more smoothly, with fewer insufferable moments and the cut bits didn't advance the story.
Special Thanks:
Zarius, subjectzero, Gelflinghand, TM2YC, bionicbob for their enthusiasm and convincing me that B5 is worth the time and effort to edit despite its poor visual mastering.
Release Information:
DVD
Special Features
DVD (PAL 16:9)
5.1 Surround
English Subtitles
8 Episodes: 5.01, 5.03-04, 5.06-10
Total Run time 336 minutes (just 4 minutes cut)
Editing Details:
Consideration 1: I was never convinced that Byron IS a martyr, with a place in (future) history books, rather than someone who WANTS TO BE a martyr, and will be forgotten with time. I prefer the second interpretation because that fits Lyta being the liberator for her people, with Byron merely being the catalyst that drives her there. To reinforce that narrative, the focus on Byron's character is slightly reduced.

Consideration 2: Effort was made to keep the cuts as small as possible while achieving the desired effect. Many of them are micro-edits. Annoying bits that are relevant to advance the overall story are retained or only minimally trimmed. Again, this doesn't remove Byron. It clarifies that he's a secondary character, not a primary one. Other storylines that run through these episodes, including Londo and G’Kar and the Interstellar Alliance, are unchanged. Episode numbering follows the viewing order that Day of the Dead is s5e12.

Scope: This includes all eight episodes with Byron. They're not merged into one big movie, they're simply trimmed.
Cuts and Additions:
Cutlist by episode:

s5e01 No Compromises (17 seconds cut)
- Cut "The geometries that circumscribe your waking life. Drawn narrower and narrower until nothing fits inside them anymore."
- Cut "Come alone."
- Cut "Ours is a simple way, as you will discover."

s5e03 The Paragon of Animals (43 seconds cut)
- Cut "That little personality quirk must have cost you more than a few relationships."
- Cut "and babble" in the otherwise retained "mundanes want us to fill our heads with noise so we won't hear ...".
- Trim "We will work, we will fix, sell [, rent] our services. We will do whatever we must to survive. But we will no longer take orders from [mundanes, or belong to] organizations which take us in only when it is convenient." I had no issue with the word "rent", I cut that to solve a bad visual cut.
- Trim Byron and Lyta's first meeting. His behavior felt like watching an abusive relationship play out on screen. Cut "I can see it in your eyes. Your bearing. Here, sit. [Byron kicks over chair] No! It was not phrased as a request, now was it? It was phrased as an order: Sit. Stand. Roll over! Bark! Always taking orders." Retained some taunting before Byron turns polite. Cut the subsequent "It felt better, didn't it? To be asked? To have someone do for you for a change." I used a trimmed cutaway shot of Lyta's face, flipped for directional accuracy, to let Byron's lines flow together without visual jump. Watch the edited result in a later post.

s5e04 A View from the Gallery (9 seconds cut)
- Cut "A fellow of infinite jest". Retain "I knew him, Horatio", because that sets up the subsequent dialog. The Shakespeare quote was incomplete and our of order, now it's merely incomplete.
- Cut "Tell me that it matters to you." And the reply "Yes, it matters to me." Rant on. Pedant. Rant off.

s5e06 Strange Relations (60 seconds cut)
- Cut "After the rest of my people are freed. Good day." A silly line, right after Lochley ordered Zach to free the telepaths.
- Trim the telepaths' candlelit song. The focus is on Lyta and her willingness to join the group.

s5e08 In the Kingdom of the Blind (10 seconds cut)
- Cut Byron's Captain-Obvious line "but it is dangerous."
- Cut "I'm sorry" at the start of Byron's blackmail-speech to the Council to make him less of a hypocrite, since he's not sorry at all.
- Cut "They have to see we're not acting against them." to make Byron less naive.
- Remove one intercut of upset telepaths while their brethren are fighting Drazi, to focus more on Lyta getting upset that fellow telepaths are in a fight.

s5e09 A Tragedy of Telepaths (21 seconds cut)
- Remove one unflattering cutaway shot of bystander telepaths while Lochley and Byron talk. They looked morose with wigs. No one should be that passive in the face of urgent mortal danger! I don't mind the long hair, just make it look like real hair, not wigs.
- Trim a shot of telepaths straining to mentally resist Bester. The facial overacting from the front-and-center telepath was distracting like Dan Ackroyd on SNL.
- Cut a shot of telepaths looking morose.

s5e10 Phoenix Rising (32 seconds cut)
- Cut Byron kissing Lyta in the middle of the telepath group, with the telepaths immediately all putting their hands on them. The hands-on thing is weird and does not improve the story.
- Cut a brief shot of Byron during the main firefight, of him flicking his hair in much too casual a manner.
- Cut "If you stay then our love was false and my life was in vain. It'll be the end of everything I've worked for." Really, Byron? If Lyta chooses to die with you then her love is false? And she'd responsible for your whole life being in vain? Stop it with the abusive relationship talk, Byron!
- Cut Lyta saying "remember Byron" to each telepath as they leave, as if she's giving holy communion. I don't want to remember Byron, I want to remember Lyta. She's the key telepath!
Cover art by lapis molari (DOWNLOAD HERE) 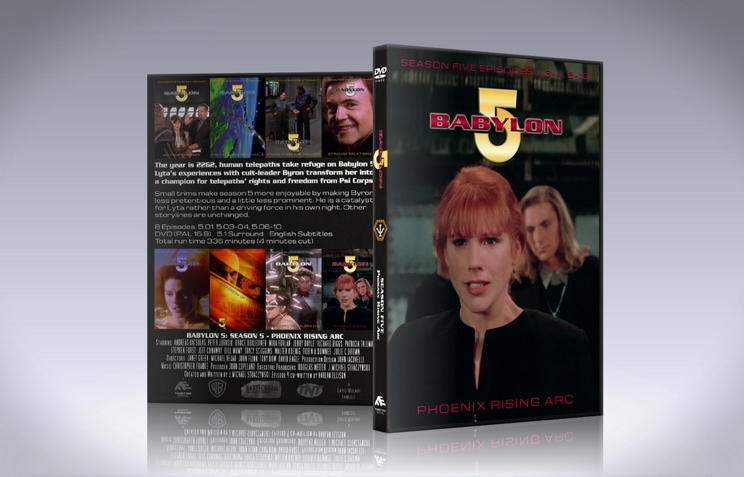 Babylon 5's fifth season got dealt a raw hand...JMS had blown his creative wad tying things for season four when it was thought the show had only that season left to tie everything up. Stories are he lost his notes for season five so a lot of it was stitched together from memory and lack of time, it often shows in the first half of the season, and it is that half that has been edited in this product.

There are minimal cuts, but the intent is clear: to make Byron less of an overbearing prescience, allowing his growing threat to develop in the background and steadily come to the forefront. It's a simplified case of showing, rather than telling in JMS's usual style, that there is something well intentioned but ultimately doomed brewing on Babylon 5. Each of the edits are masterfully disguised, you wouldn't think anything was amiss.

While season five of B5 is not perfect, this edit does what it can to make the worst aspect of this season a little more durable. Whether or not it can supplant the originals in people's eyes must be a case for the books...history will attend to itself

This has been an ISN Special Report.
Z
zarius Top 50 Reviewer 120 reviews
Report this review Comments (0) | Was this review helpful? 0 0