Brief Synopsis:
This is a fast paced version of A.I.
The ending is changed and the event goes more along the way they do in the short story by Brian Aldiss.
Intention:
Initially, this edit was started to develop a better ending for the film – at the same time, the faneditor discovered the original short story by Brian Aldiss that provided the basis of the film. So he decided to make the film more akin to the themes of the short story, in addition to changing the ending to better fit those concepts.
Special Features
DVD Features

DVD Format: NTSC – DVD9 DL
Region: 0 (region free)
Aspect Ratio: 1.85:1, 16×9 widescreen
Audio format: 5.1 Dolby Digital
Language: English
Subtitles: none
Custom DVD Menus
DVD Extras: Alternative Ending: “Happily Ever After…”
DVD Extras: Fanedit Trailers – “The Matrix Evolutions”, “Silent Hill: Red God Remix”, and “Noir Simulacrum”
Cuts and Additions:
Major Edits/Changes
Change/Cuts: David’s Family & Monica aka “Mommy”
In the original story, the Swinton family really didn’t give a damn about David: he was merely an object, a “toy” for them play with and use. The Monica character was more conflicted about her feelings for David than Henry (because David really did “love” his Mommy), but in the end, she continued to view him as an artificial mecha (never as a real child). For this Edit, I decided to remove any additional scenes/subplots that focused the story more on the Henry, Monica, and Martin characters instead of David: this was because I felt that once David finally “awakened” in the story (i.e., when he is imprinted onto Monica and became a true conscious entity), the film’s focus should be entirely on him and his quest to become real.

Cuts: “Pool Party” + “Letters to Mommy” Scenes
The Pool Scene was one of the major scenes that I hated from the original film, both from a narrative point of view (Martin hates David… OK, we get it now…) and from a logical perspective (so spinach can harm David, but not water? WTF?!). With the scene gone, the ending that I developed for the Edit (David “dying” in the ocean) is now plausible and understandable.
The Letters Scene I was a little more hesitant on removing, because it was a scene from the original short story. However, Spielberg completely missed the point of it: in the short story, the focus of the scene was on David and his attempts to understand these feelings he had toward Monica; the film, however, he pulled the viewers focus entirely on Monica and her “dilemma” on what to do with David (also, the scene no longer had any context due to the Pool Party scene being removed).

Cuts: No Philosopher Robots
I prefer it when a film’s philosophical concepts are presented either informally or as subtext – NOT when characters on screen go jabbering on and on about Humanity’s prejudices/intolerances and random crap like humans’ “Rite of Blood”. Also, I felt that only David (and to a lesser extent, Gigolo Joe) should be advanced enough to contemplate intellectual/emotive human concepts.

Cuts: Professor Hobby
A few minor cuts which dealt with Hobby and his son who had died (and who was the basis for David’s design) – the notion is still there, except now it’s just briefly implied (and doesn’t beat the viewers over the head with scenes of Hobby looking at his dead son’s photo).

Changes/Cuts: The Ending
This was the major reason I decided to do this edit, as I absolutely and completely HATE the ending of the original film. For me, having David finally realize the truth of his nature – that he can never be a real human, that he is a mere ‘product’ for humans to use and discard, and most importantly of all, that he will never gain the love of the one being that he loves above everything else (his “Mommy”) – and then choose to end his existence rather than continue to live a never-ending lie, that is what I believe the end of A.I. should have been.
So we have the following changes:
- No jump to 2000 years into the future
- No aliens/robots (yes, they’re technically supposed to be advanced robots, but come on Spielberg, get more original with their design!)
- No meeting the (fake) Blue Fairy
- No one day together with (fake) “Mommy”
- No going to sleep/being able to “dream”

Change: End Credits
For this, I switched the color scheme of the credits from “white text on a black background” to a “black text on a white background” scheme – the music for the credits was also changed from John William’s score to a song of my choice (which is listed at the start of the end credits).
Cover art by JasonN (DOWNLOAD HERE) 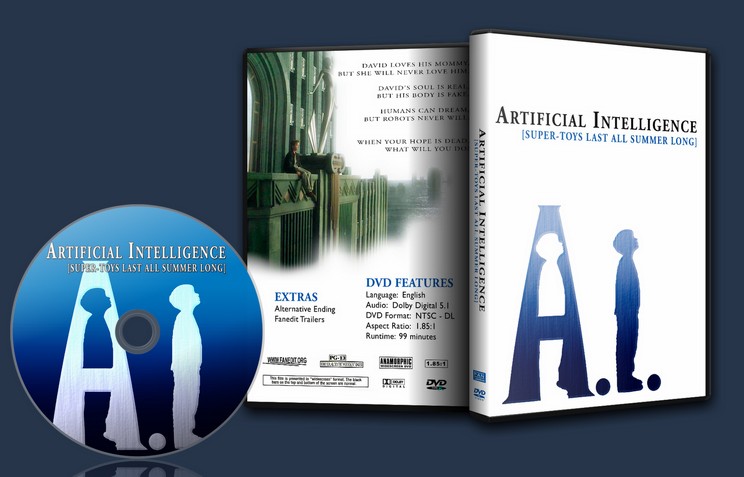 JasonN has created in my opinion a much better version than the theatrical release. It flowed and was quite entertaining. The problems with the original are still present in the FanEdit but to a lesser extent. I agree with all of the changes made by the FanEditor in context with this version of A.I.

The ending is only slightly abrupt but very plausible as David has essentially given in to the human urges of jealousy and anger, so as a result commits a brutal act of robotic murder. As this is the case, he can just as easily feel the human emotions of depression or remorse and so end up killing himself. At the point at which he gains the irrational and illogical emotions so unique to the human, he has technically become one.

I do have to ask; If David shows such an aptitude for violence would not the line of ‘David Super-Toys’ not have to be redesigned and the inventor’s reaction be one of dismay?

I think if the very end had used some climactic music that reached a crescendo, rather than a fade-out in the middle of a piece of music, the ending would have more finality and not feel so uncertain. The idea works well, it just needs to be punctuated.

So on the whole this is a very interesting FanEdit with it’s own story to tell. It is enjoyable and well made. The editing is faultless, as is the sound editing. The DVD is simple with a static menu.